Mr Andrews Hawrylyszyn, Director of Gyeta Wildlife Reserve has hinted of his company’s intention to establish a safari project in the North Tongu District of the Volta Region.

He said the project would be known as Gyeta Wildlife Reserve and required a vast land with no human settlements.
Mr Hawrylyszyn dropped the hint when he in the company of Mr Collins Arku, District Chief Executive (DCE) for North Tongu called on Dr Archibald Yao Letsa, Volta Regional Minister, at his office in Ho to declare his intention for the project.
Mr Arku disclosed that the district had about 65,000 acres of land which was situated out of the main town with no human settlements.
The Regional Minister assured the Company of his outfit’s support in ensuring that the project materialised.
He counselled Mr Hawrylyszyn to seek audience with the Minister of Land and Natural Resources to deliberate on the project. 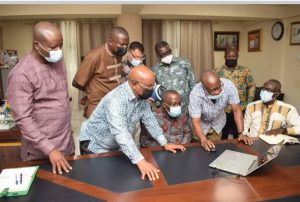 Dr Letsa expressed the hope that the project would start sooner than expected and described it well-thought through.

Parliament must build capacity to use data — Bagbin

Patapaa's 'One Corner' act with wife to produce a baby soon? | Ghana Music