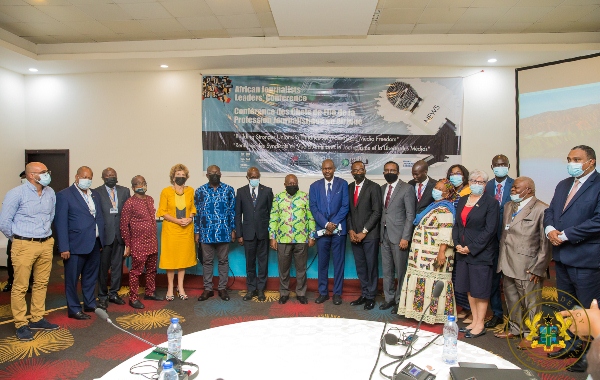 The President, Nana Addo Dankwa Akufo-Addo, says a vibrant and unfettered media is the most effective way to hold Government and society to the highest standards of honesty, self-discipline and delivery.

According to President Akufo-Addo, a historic victory was won in the struggle of the Ghanaian people for liberty and, especially, for freedom of expression by the repeal of the Criminal Libel Law, which brought to an end more than a century-old regime of colonial laws repressive of free expression.

“I am proud of the modest role I played in the process of the repeal of the Criminal Libel Law. As the Attorney-General, who piloted the repeal through Parliament, I was also responsible for the discontinuation of the then pending prosecutions, under the Criminal Libel Law, of notable Ghanaian journalists Tommy Thompson, Kofi Coomson and Eben Quarcoo for publications against personalities of the then government,” the President said.

He noted that the repeal of the Criminal Libel Law has had a very positive impact on the development of the Ghanaian media, freeing it from unnecessary self-censorship, and promoting a robust and critical media culture.

“In the process, (the repeal of the Criminal Libel Law) has contributed to the growth of a vibrant media that has won Ghana the reputation of having one of the most media friendly and liberal climates on the continent. It has also contributed significantly to the deepening of democracy in our country, enhancing public accountability as a strategic goal of public policy,” President Akufo-Addo said.

President Akufo-Addo made this known on Tuesday, 1st June 2021, when he delivered the keynote address at the Africa Journalists Leadership Conference, organised by the Federation of African Journalists, at the Alisa Hotel, in Accra.

As President of the Republic, the President told the gathering that he has seen to the passage of the Right to Information Act, which is meant to give effect to Article 21(1)(f) of the Constitution of the Republic.

The culmination of all of these, he said, have meant that the Ghanaian citizen, through the presence of a dynamic media, is able to give boldly and freely his or her feedback on policies and programmes of government.

Civil society groups, President Akufo-Addo added, are able to interrogate fearlessly government actions and positions, compare them to global best practices, and offer views and critiques aimed at complementing the efforts of government; and the political opposition is able to raise dissent openly, canvass for alternate view points, and, by so doing, offer our citizens alternatives to consider on all key issues of our national discourse.

“Even as one of the public figures most persistently vilified in sections of the Ghanaian media, who, ironically, was a principal actor in the repeal of the law, I continue to insist that its repeal was necessary in the public interest in our emerging democracy. I maintain that I prefer a boisterous, reckless media, to a supine one,” he added.

DVLA to clampdown on drivers with embellished number plates

No ban on Ghana cocoa over child labour claims — EU

No ban on Ghana cocoa over child labour claims — EU