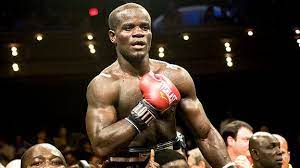 Joshua Clottey believes the refusal of managers and promoters to test their boxers against credible opponents has lowered the standard of boxing in the country.

The former International Boxing Federation (IBF) welterweight champion says the current canker must be dealt with by the Ghana Boxing Authority (GBA) to bring back the competitive nature he witnessed during the start of his professional career.

Recently, the GBA issued a statement to managers and promoters warning them against offering half-baked boxers the chance to improve the records of their fighters.

In the letter, the association stated that fighters would be required to hold their licenses during weigh-in sessions as well as demanding them on fight nights.

The move by the GBA is to help avoid mediocre bouts which continue to denigrate the image of the fistic sport in the country.

In an interview with Graphic Sports, Clottey explained that he no longer visited fight nights because of the poor matchmaking by promoters in the country.

Clottey said investors would shy away from taking up boxing with the current state of the sport in shambles, and tasked the GBA to ensure only credible bouts were sanctioned.

“I have stopped going for fight nights because I know there is no good fight to watch on the shows,” said Clottey. “It is a really disturbing development that must be dealt with by the GBA to prevent the sport from further declining.

“Promoters and managers are refusing to test their fighters because they are only interested in building records of their boxers so that they can fight for championships and make money.

“But the problem here is that these fighters get to the world stage and fail miserably because they haven’t fought any credible opponent throughout their careers.”

#CitiBusinessFestival: Recruit for the future in making businesses digital-ready