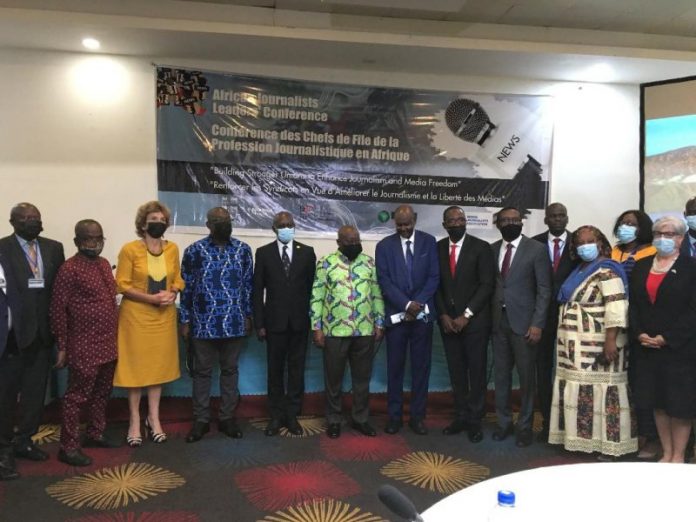 Mr Roland Affail Monney, a Steering Committee Member for the African Journalists Leaders Conference, has asked journalists to rise and fight against the harsh conditions, which inhibited their work and imperiled their lives.

Speaking at the Federation of African Journalists (FAJ) conference in Accra, Mr Monney said, “a threat to press freedom anywhere in the world is a threat to press freedom everywhere.”
The Conference would discuss strategies to shape the media industry on the continent in response to the COVID-19 pandemic and come out with the Accra Declaration, which would articulate the future direction of journalism in Africa.
He said the Conference coincided with a raging debate on the state of press freedom in Ghana generally and a strident assessment, specifically of President Nana Addo Dankwa Akufo-Addo’s commitment to the same.
All those, he said, was healthy for a robust democracy in which viewpoint diversity must be manifestly venerated and not maliciously castigated.

“This is our take: We believe that the annual global press freedom index is an empirical tool to measure the degree of media freedom in Ghana, which is currently ranked 3rd in Africa and 30th in the world. To say that Ghana’s media system is free of challenges is to play the ostrich.

“And to claim that the same system is deficient of freedom is to stretch the truth,” he said.
Mr Monney said journalists alone could not and should not wage the fight against the cancer of impunity on the continent.
He called on Civil Society, Democracy Lovers, Traditional Rulers, Reverend Ministers, Revered Imams, and media consumers to all join forces with the media to win the war against impunity.

“We are fully aware that journalism is risk-prone, but not cash-rich profession. However, the vertiginous rise in the number of at-risk journalists in Africa, the lion-like savagery and animalistic abuse of their rights are unacceptable.

In this regard, we welcome the policy direction of the Biden administration to sharpen its focus on press freedom and the preponderance of threats against journalists in the world, including our dear continent Africa,” he said.
Mr Monney said another issue worth tackling had to do with the precarious working conditions of journalists in Africa.
He said, “… even the slave wages of journalists are in arrears and in scenarios tearfully painful to recall, some journalists are not paid at all.”

Mr Monney said the situation did not justify the proneness of any poorly paid, heavily owed or zero-salaried journalist to be cheaply bought, easily compromised, or willfully become chief of mischief.”

#CitiBusinessFestival: It may take Ghana 20-yrs to go fully cashless