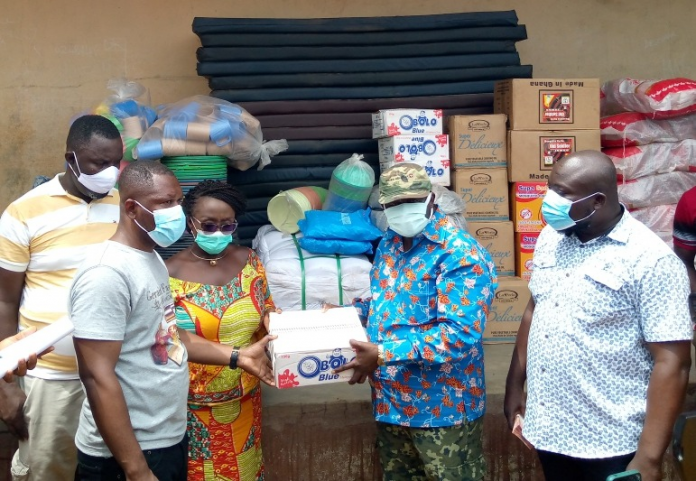 The items, which came with GH¢20,000.00 cash donation, was aimed at providing some support to the over 1,000 displaced persons from over 100 households at Agavedzi and Salakope communities.

Nana Agyeman Prempeh, Director General of NADMO during the presentation said the Organisation sympathised with the victims of the tidal waves and promised to advocate the extension of the must-happen sea defence project to the remaining coastal communities in the Municipality to bring an end to their plight.

He debunked the assertion that NADMO and government were less concerned about the devastation happening in the Volta Region explaining, as a coordinating agency, they had to go through some processes including; searching and assessing data in an event of a disaster before determining, which relief items to provide.

Nana Prempeh said just as in 2017, when the sea caused destruction to households and the local Assembly and the then Member of Parliament (MP) for the area, Mr Fiifi Kwetey responded, in times like this, the representatives of the people ought to swiftly come to the rescue of residents pending the response from the national agency.

Mr Edem Elliot Agbenorwu, Municipal Chief Executive of Ketu South said the presentation from NADMO team was such a joy and that the items were enough to take care of the needs of the displaced people while appealing to the government for an “urgent need for extension of the sea defence project to collectively protect the coastal communities.”

Madam Dzifa Abla Gomashie, MP for Ketu South who expressed gratitude for the donation underscored the need for government to consider building a defence wall on the ticket of urgency to restore hope to her people noting, “we want to fend for ourselves, go out to fish and not wait for fish from government.”

Madam Afi Morladza, a resident of Salakope, who is currently displaced said she wished she could be happy about Friday’s donation but she was worried more about a place of abode, where could comfortably use the items and called on the President to respond to their plea for a sea defence wall to save their communities from destruction.

Dissimilar reactions from public on 13% increase in transport fares

Dissimilar reactions from public on 13% increase in transport fares

Prepare for AfCFTA now despite challenges or lose out later

Prepare for AfCFTA now despite challenges or lose out later