The Department of Parks and Gardens has begun a nationwide project to plant, nurture and sustain one million trees across the country in the next two years.

The initiative Dubbed ‘Planting for Now and the Future’,  forms part of efforts by the department to encourage more tree planting to preserve and protect the environment.

As a result, the department has started moves to solicit financial support from stakeholders interested in the environment to secure the needed tools, equipment and trucks to effectively execute the project within the stipulated period

This came to light at a forum at the Aburi Botanical Gardens to mark this year’s World Environment Day organised by the department last Saturday.

The forum was climaxed with a symbolic tree-planting exercise, with 10 trees planted by dignitaries present to signify the official launch of the project.

Others were the District Chief Executive (DCE) for Akuapem South, Mr. Frank Aidoo; the Director in charge of General Administration at the MLGRD, Mr. Frank Raji, and the Project Director of the Rebecca Foundation, Mr. Daniel Kwakye.

That, he said, was to help create awareness, develop a green economy and educate the young ones to inculcate in them environmental consciousness. He said the team was replicated in 10 regions across the country.

“Because of the growing concern for our environment, we have mobilised distinguished men and women who have made a great impact, being lovers of nature and ready to invest their time and resources in protecting the environment, as patrons of the team.

“Their role is to guide, direct and lend their credibility and support to solicit for funds to sustain the one million trees the department is planting across Ghana in two years,” Rev. Okine said.

The Minister of Local Government, Mr. Dan Botwe, in a speech read on his behalf by Mr. Raji, said the department was mandated to ensure the development of the horticultural potential of the country, in line with operationalising the broad environmental policy directives of the Constitution.

According to him, the ministry was delighted to support the department in the launch of the project.

The First Lady, Mrs. Rebecca Akufo-Addo, in a speech, said animals and even fungi and bacteria rely on trees for habitation, refuge and food. 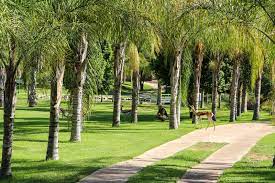 u can see, humans, animals and the environment depend on trees for survival. As climate change and global warming become more of a threat to our planet’s ecosystem, we can no longer remain indifferent,” she said.

Launching the project, the Aburihene urged the government to take deliberate steps to bring back the past glory of the department.