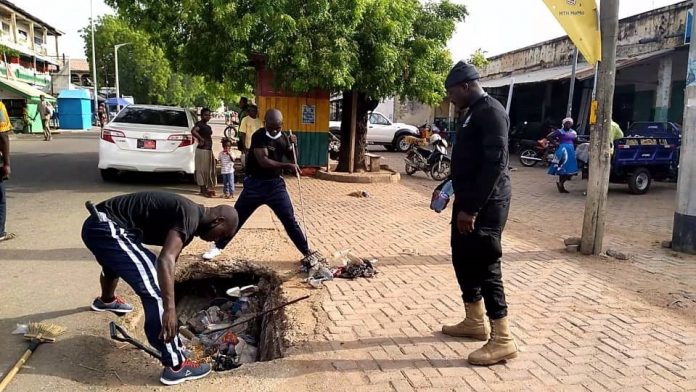 The Upper East Regional Police Commander, the Deputy Commissioner of Police (DCOP) Dr. Sayibu Pabi Gariba, has led a team of police personnel to clean up the Bolgatanga Township.

The exercise, which brought together 267 police personnel from the Regional Police Headquarters and the Police Public Safety Training School in Pwalugu, saw the cleaning of the gutters, streets, lorry stations, and markets in the Municipality.

It was done in collaboration with the Bolgatanga Municipal Assembly and the Zoomlion Ghana Limited.

Speaking after the clean-up exercise, DCOP Gariba said the exercise was part of the police’s contribution towards ensuring environmental cleanliness and safety.

He noted that a clean environment was key to ensuring a disease-free society and, therefore, imperative for Ghanaians to ensure that their environment was clean at all times.

DCOP Gariba said the police were determined to regularise the exercise and expressed optimism that their initiative would influence the public to join the campaign for a clean environment.

“I think the people seeing the police cleaning the environment today would be motivated to join us the next time. It is not about using force to compel the people to clean, it is about educating and sensitising them to understand that a clean environment is for their own good,” he added.

The Regional Commander commended personnel for their commitment to the exercise and urged them to continue to be professional in maintaining peace, law and order in the Region.

The Municipal Chief Executive, Mr. Joseph Atura Amiyuure, applauded the police and their partners for the exercise and said it would compel the citizenry to join the subsequent campaigns.

He said the exercise would be held monthly and appealed to other security agencies to join to ensure a clean environment for healthy living.