Ghana’s struggles with judgement debts have seen it haemorrhage GH¢1.89 billion in judgement debts between 2000 and 2019, according to a report by the Centre for Social Justice (CSJ).

In the report, the centre notes that this figure is equivalent to 135 percent of new multilateral loans contracted by the government in 2019.

The reasons for the judgement debt ranged from contractual breaches to the Government’s failure to promptly pay compensations for its compulsory land acquisitions to statutory breaches committed by public officials in the course of their official duties.

Judgement debt due to contractual breaches accounted for 73 percent of the total judgement debt payments made over the period covered in the report.

Judgement debt due to failure to promptly pay compensations and statutory breaches accounted for 25 percent and 1.6 percent respectively.

To date, the largest amount of judgement debt payments made in a given year was GH¢356.6 million paid in 2010.

That amount was equivalent to about 20 percent of the total education expenditures for that year alone. 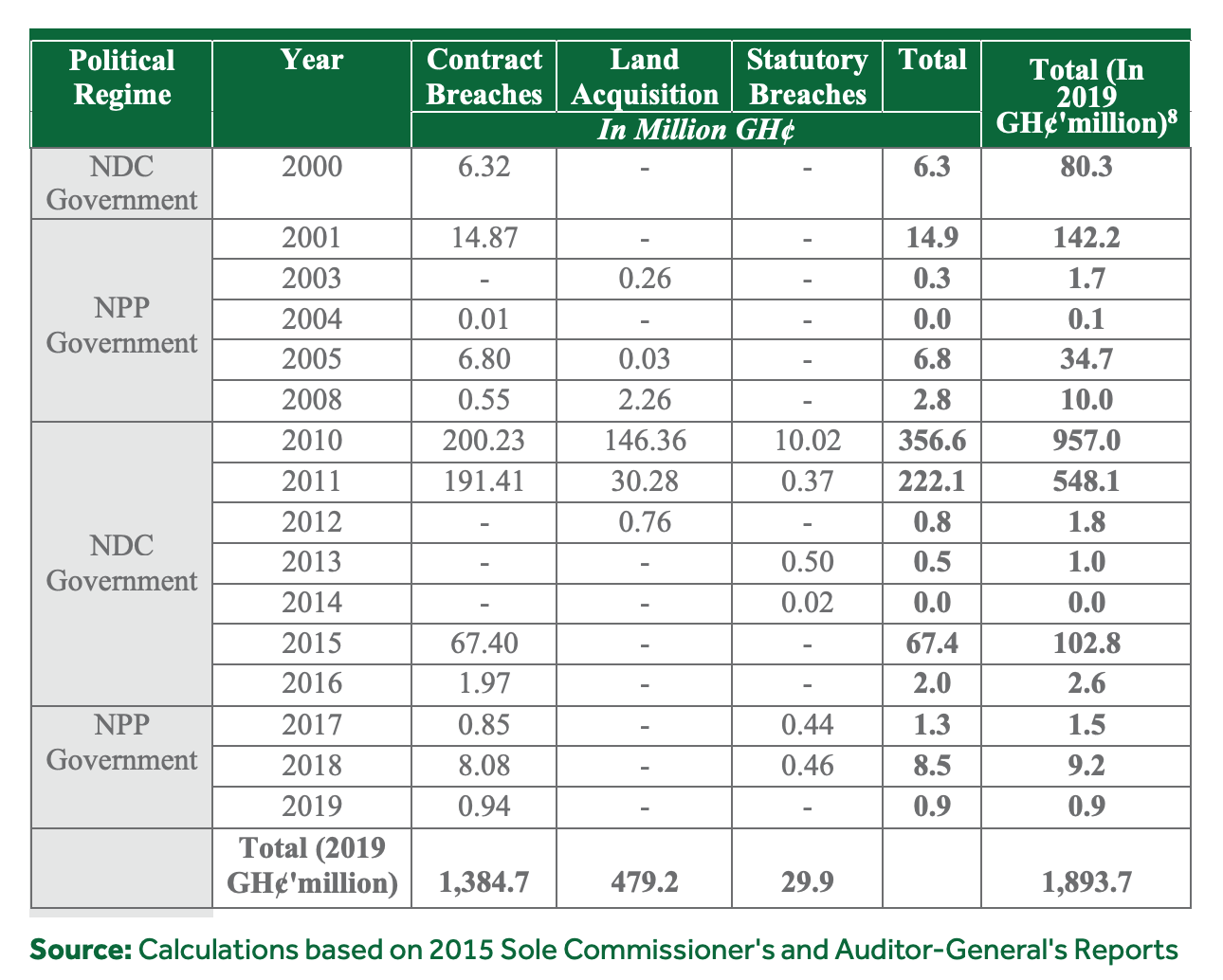 The report noted that illegal abrogation of contracts involving huge amounts of money, which is part of judgement debts arising from contractual breaches, have mostly followed political transitions, according to the Sole Commissioner’s report.

“Most judgement debts occur due to negligence, blatant disregard for public procurement laws, illegal abrogation of contracts, corrupt activities by public officials in their line of duty, all of which have resulted in the payment of huge sums from the public coffers,” the report explained.

Centre for Social Justice further notes that, per the Auditor-General’s reports from 2013 to 2019, “staggering amounts of judgement debts awarded against the State remain outstanding.”

“For example, in 2017 alone, the amount outstanding as shown in the Auditor-General’s report was GH¢411.6 million,” it added.

One of the cases cited in the report highlighted the damage caused over the years as a simple contract multiplied over a thousandfold into judgement debts.

The Report of the Sole Commissioner for Judgment Debt Enquiry contained the payment of US$35 million to Rockshell International Ltd as negotiated settlement payment for performance under a contract to supply stones to the Keta Sea Defence Project.

After several unsuccessful demand notices and follow-ups, the company instituted legal action against the State and obtained a favourable judgement on November 20, 2006.

A total of US$70 million was awarded by the court in favour of Rockshell International.

The government at the time could not settle its indebtedness to the company but after a series of negotiations that ended in January 2009, the state agreed on the payment in instalments totalling US$35 million as the full and final settlement of the judgement debt.

The most recent judgement debt concern was the US$170 million, awarded against the government by the London-based United Nations Commission on International Trade Law (UNCITRAL) tribunal this year over the termination of a power purchase agreement with Ghana Power Generation Company.

GPGC dragged the government of Ghana to UNCITRAL after the official termination in 2018, demanding compensation from the government for a breach of the contract.

This judgement debt was not captured in the Centre for Social Justice report.