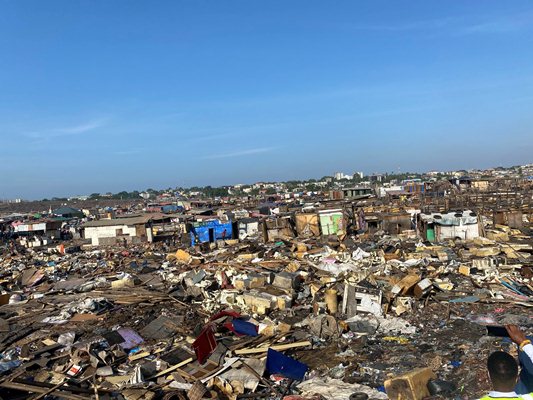 A week-long massive clean-up has commenced at the Onion market and scrapyard at the Agbogbloshie Market in Accra, to bring sanity to the area and secure the land for future development.

This follows the relocation of most of the traders to a new site at Adjen Kotoku in the Ga West Municipality of Greater Accra yesterday, after the lapse of the seven-week ultimatum by the Greater Accra Regional Coordinating Council.

The relocation, clean up and reclamation forms part of the Regional Minister, Henry Quartey’s “Let’s Make Accra Work” initiative aimed at decongesting the Central Business District, of Accra to ensure the free flow of vehicular traffic and give it the national capital Accra the image it requires.

Meanwhile, reports say scavengers have taken over the area in search of valuables left behind by the traders.

The traders who relocated to Adjen Kotoku are entertaining fears of congestion due to the lack of space to accommodate their huge numbers.

They also complain of the lack of social amenities such as a Mosque toilet and washing facilities.