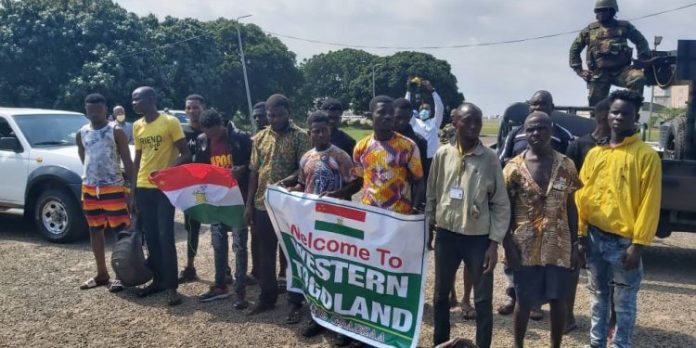 Detective Inspector Richard Amoah told the court that the prosecution had received advice from the Attorney General’s office on the docket, indicating that there was not sufficient evidence against them.

The magistrate, therefore, discharged the accused persons. Meanwhile, two others who were arrested later, Cosmos Havor and Vincent Ramsayer, were remanded into police custody to reappear on July 15, 2021, awaiting advice from the Attorney General.

Detective Inspector Amoah said on or before September 25, 2020, the accused persons, together with others at large, agreed with a common purpose to secede from the Republic of Ghana.

He said pursuant to their agreement, on September 25, 2020, between the hours of 0100 and 0700, accused persons and others at large armed themselves with offensive weapons such as guns, cutlasses, clubs and many others.

The prosecution said they simultaneously launched an attack on some selected government installations within towns in the Volta and Eastern Region, namely, Aveyime, Mepe, Bator, Juapong and New Akrade.

He told the Court that the affected government installations include North Torngu District Assembly, Aveyime and Mepe Police Stations.

Additionally, he said, they took along a Police patrol vehicle at the Aveyime Police Station with registration number GP 195.

The prosecutor said at the District Assembly, they forcibly broke into the offices and made away with five desktop computers, one MTN Turbo net router, one refrigerator and a printer.

“They unlawfully blocked the four major roads that connect the Volta Region from Accra direction amid chanting “Freedom! Freedom!! Freedom!!! this is our land” and obstructed Road users access to the road,” he said.

According to him, the Police vehicle, four AK47 rifles, 55 rounds of ammunition, six AK47 magazines, one bio net and tear-gas were retrieved. Police intelligence led to the arrest of the accused persons and they were arraigned.