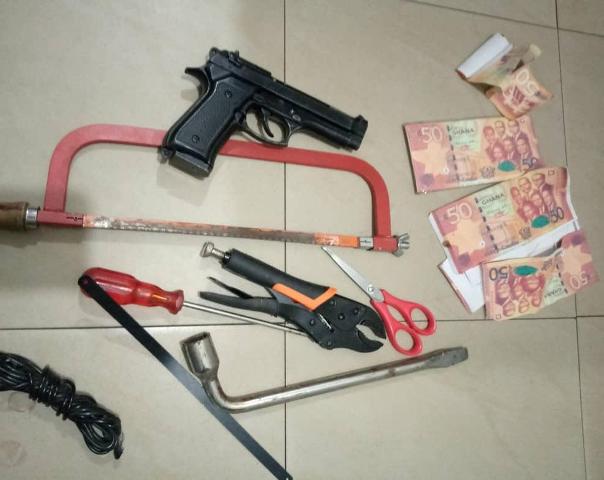 The Nungua Police in a snap check has arrested a Togolese for allegedly possessing firearm and offensive implements.

Tony Hounjeoe, was arrested together with a black backpack containing one Pistol with the inscription: *MOD. 92 AUTO KIMAR 9mm P.A. ITALY, a hacksaw blade, a wheel spanner, a cuter and a pair of scissors.

Mrs Tenge said on Tuesday, July 06, 2021, at about 0100 hours, the Police at the snap check duty points at Nungua arrested suspect Hounjeoe.

In addition to the items found on suspect were about 20 of GHS50.00 notes suspected to be counterfeit, she said.

“On the same date at about 1240 hours whilst on duty at Baker six, the said suspect in the company of two others, now at large, onboard a Nissan Primera taxi cab with registration number ER 2343 U, was stopped at the Nungua checkpoint,” DSP Tenge noted.

She said a thorough search was conducted and the bag containing the aforementioned items was retrieved from the suspect, explaining that he was immediately arrested and taken to National Operations Department at the National Police Headquarters for further investigations.