1 dead, 6 injured as truck crashes into toll booth at Tema 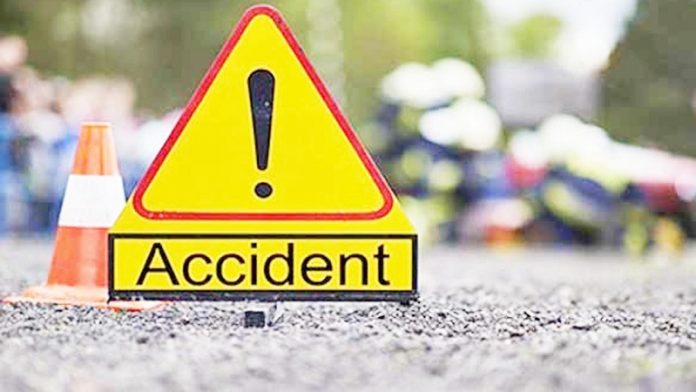 One person was killed and six others sustained injuries after a tipper truck rammed into him at the Ashaiman Toll Plaza on Monday, July 12, 2021.

The deceased, Isaac K. Koomson, 53, a hearing impaired man who was employed as a cleaner at the toll plaza, was said to be involved in his usual routine of sweeping when the tipper truck with registration number GG 3542- 20 carrying gravels crashed into him after hitting and destroying one of the six toll booths.

The hearing-impaired man did not hear the screams of danger by onlookers and was crashed by the truck.

The deceased and six others who sustained injuries were rushed to the Tema General Hospital for medical attention.

Doctors initially said he risked losing both legs and an arm due to the severity of the crash but Koomson gave up the ghost a few minutes to midday.

Eyewitness alleged that the driver might have lost control of the vehicle due to brake failure. As a result, it smashed into a salon car ahead of it whose drivers had stopped to pay the toll. Aside from the damage caused to the tollbooth, two vehicles including a saloon car whose driver and two passengers also sustained some injuries were damaged beyond repair.

A newspaper vendor at the toll booth who gave his name as Kwadwo Amoah said that he saw the vehicle approaching the toll plaza with top speed and all he could see was it had crashed into the concrete barrier and collapsed the structure.

The Tema Regional Commander of the Motor Traffic and Transport Department (MTTD) of the Ghana Police Service, Superintendent William Asante told journalists that all the seven people injured at the scene were taken to the Tema General Hospital for treatment, adding that, the police has opened an investigation into the accident.

Meanwhile, initial investigation conducted by the Police MTTD indicated that at about 06:30 a.m. on Monday, a suspect driver Isaac Osei, 37, of Kasoa was driving Howo Sino Truck with registration number GG 3564-20 loaded with gravels from Dawhenya towards Kaneshie and the police said, at the Tema Toll Plaza the truck knocked down Mr. Isaac Koomson, a cleaner at the booth and crashed into the said booth which had Mr. Ernest Antwi as the attendant injuring him in the process.

The truck subsequently ran into the rear portion of a Nissan Saloon car with registration number GG 5401-15, driven by Mr. Emmanuel Arthur, with two female passengers on board.

The Police said the concrete booth fell on a Mercedes Benz Actros Truck with registration number GE 7873-18, driven by Mr. Emmanuel Agyei, who had stopped to pay the toll.

The three vehicles suffered various degrees of damage, and according to the police, four persons who sustained injuries in the accident were rushed to the Tema General Hospital for treatment.

The police later visited the injured persons, namely Rebecca Woode, 33, and Mary Eduah, 22, who were on board the saloon car as well as the Toll booth attendant at the Accident Centre of the Tema General Hospital.

Meanwhile, the driver of the truck has been arrested and the accident vehicles impounded for further investigation.

The accident led to a halt in operation at the toll plaza for about two hours and other workers who could not stand the sight of their injured colleagues were left distraught. Some of the workers, who later commenced operations, were spotted sobbing and crying. Supervisors at the facility declined to comment about the accident.

The Medical Director of the Tema General Hospital, Dr. Richard Anthony, said seven persons, five males and two females were brought to the facility on Monday morning following the accident.

The Tema General Hospital Medical Director said of the seven, two including the deceased were in critical condition while the other five were stable. He said one of the female patients was a pregnant woman but she was stable.

According to Dr. Anthony, the doctors were working around the clock to save the lives of the victims. He stated, “We are doing our best to save the individuals. Our surgeons are all struggling to save lives.”

Some of the victims were traumatised, Dr. Anthony said, while others had aberrations, at least minor injuries, with others in shock adding that all the victims were being assessed by the doctors.