The Chief Justice, Justice Kwasi Anin Yeboah has rejected claims that he received an amount of $5 million to supposedly influence a court case.

He has subsequently petitioned the Criminal Investigation Department (CID) to probe the allegation made against him by one Ogyeedom Kwesi Atta IV and his lawyer, Akwasi Afrifa.

“His Lordship has directed that a formal complaint be made to the Criminal Investigations Department of the Ghana Police Service for investigations and the necessary action,” the petition signed by the Judicial Secretary, Justice Cynthia Pamela Addo said.

Akwasi Afrifa had alleged that the Chief Justice had demanded a US$5 million bribe to allegedly influence a court case against his client, Ogyeedom Kwesi Atta IV.

The lawyer made this allegation in response to a petition filed against him by his client at the disciplinary committee of the General Legal Council (GLC).

But the Chief Justice has denied receiving bribes from either the client or the lawyer.

“His Lordship is saddened that, without any shred of evidence, his name has been dragged into this sordid and potentially criminal matter. His Lordship confirms that he does not know the plaintiff and has not met or seen him anywhere, except in the courtroom when he rises to announce his name when his case is called. His Lordship asserts that he has had no personal interaction either with the plaintiff or his lawyer on this matter or in any other matter,” the Chief Justice said in the petition.

The Chief Justice has also directed that a petition should be lodged with the Disciplinary Committee of the General Legal Council in respect of the specific matter.

The client – Ogyeedom Obranu Kwesi Atta IV dragged Akwasi Afrifa to the GLC for allegedly taking US$100,000 from him but failing to ensure he gets a favourable judgement on his case as promised.

Akwasi Afrifa in his response denied these claims, saying his client rather asked him to refund an amount of GH¢300,000 paid as legal fees to enable him to raise a US$5 million bribe for the Chief Justice in order to get a favourable decision in a pending legal dispute – an allegation the latter has denied. 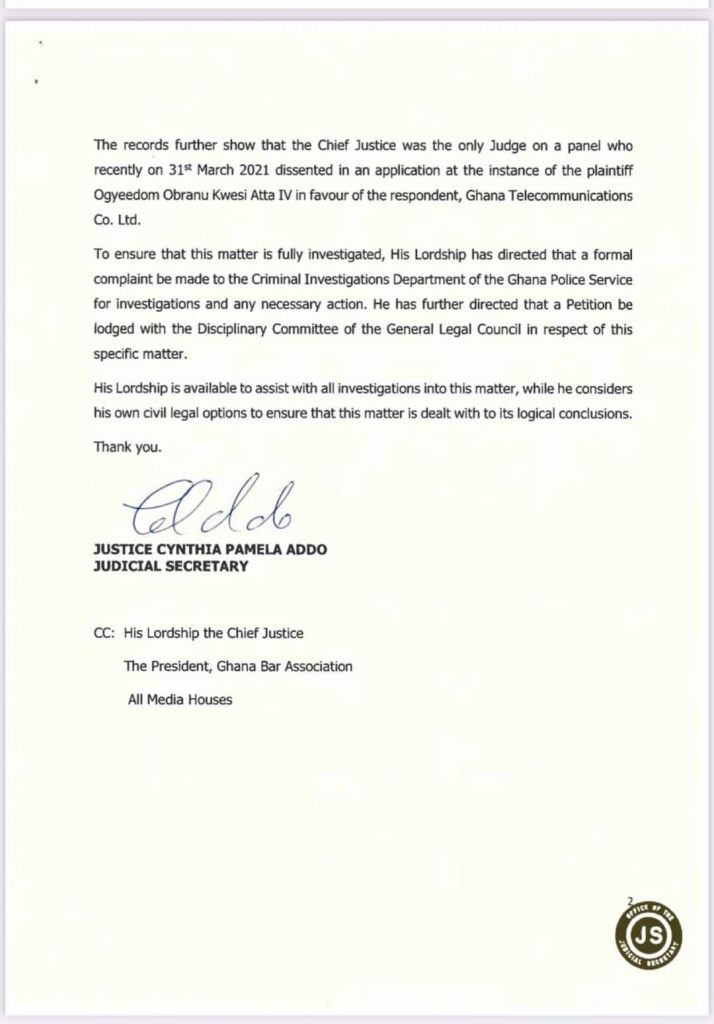