The judgment in the case has been reserved.

Smoke swirled from burning buildings as items from burgled shops lay strewn by the side of the road in Pietermaritzburg in Zuma’s home province of KwaZulu-Natal (KZN). 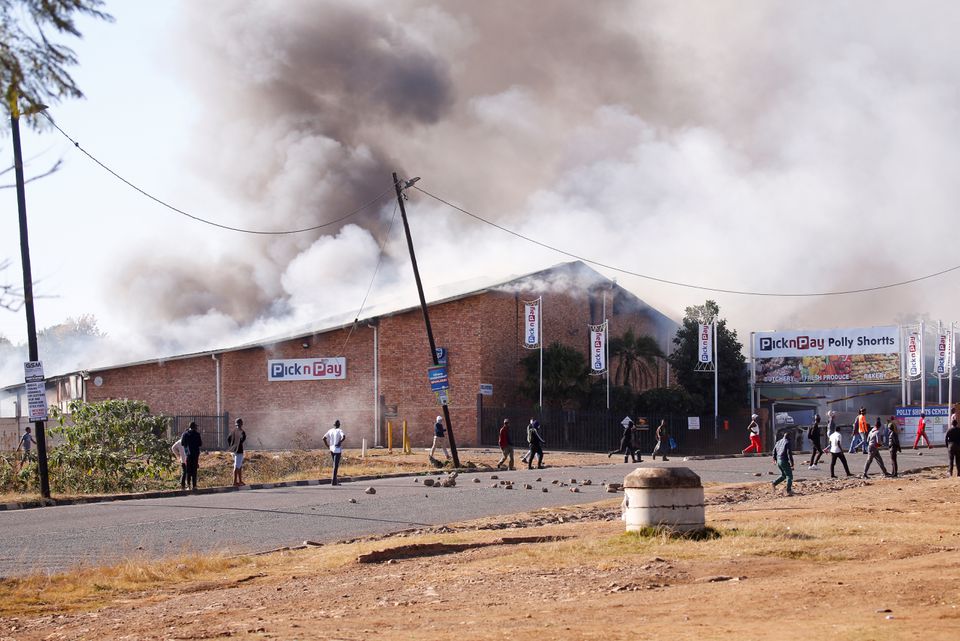 The sporadic pro-Zuma protests that broke out when he handed himself over last week have escalated into looting and arson, mainly in KZN but also in Gauteng where the country’s biggest city, Johannesburg, is located.

Some COVID-19 vaccination sites and clinics in Gauteng and KZN were shuttered due to safety concerns, the Gauteng provincial government and an independent pharmacy association said, further delaying a sluggish immunisation campaign.

“What we are witnessing now are opportunistic acts of criminality, with groups of people instigating chaos merely as a cover for looting and theft,” South African President Cyril Ramaphosa said in a late-evening address on Monday.

He said 489 suspects in the two provinces had been arrested and all government agencies had been mobilised.

“We will not hesitate to arrest and prosecute those who perpetrate these actions, and will ensure that they face the full might of our law.”

He warned that the looting of shopping centres, pharmacies and disruption to supply chains could lead to food and medicine shortages in the coming weeks, as well as disruption to the coronavirus vaccination drive.

A statement from the military said “pre-deployment processes had started” following a request for assistance from a government intelligence body, but a Reuters cameraman in Pietermaritzburg saw armed soldiers already in the streets.

The rand dropped sharply and was trading down 1.5% against the U.S. dollar at 1630 GMT.

Any confrontation with soldiers risks fuelling charges by Zuma and his supporters that they are victims of a politically motivated crackdown by his successor, Ramaphosa.

Zuma, 79, was sentenced late last month for defying a constitutional court order to give evidence at an inquiry investigating high-level corruption during his nine years in office until 2018.
The decision to jail him resulted from legal proceedings seen as a test of post-apartheid South Africa’s ability to enforce the rule of law, including against powerful politicians.

In a virtual hearing on Monday, Zuma’s counsel asked the constitutional court to rescind his jail term, citing a rule that judgment can be reconsidered if made in the absence of the affected person or containing a patent error. But legal experts say Zuma’s chances of success are slim. 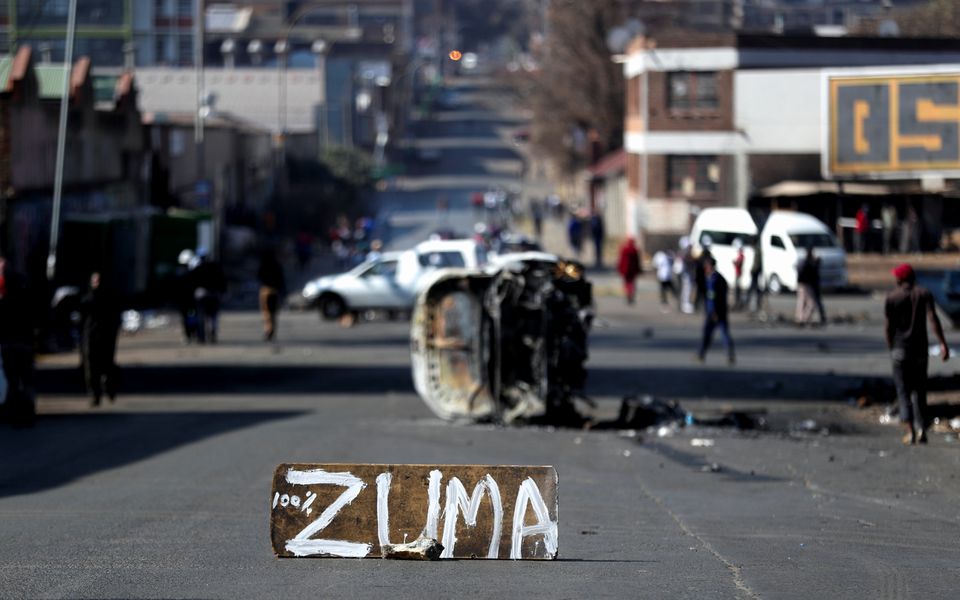 Footage shot by Reuters in the Katlehong township in Gauteng showed police firing rubber bullets at looters to disperse them.

At the Jabulani Mall in Soweto, looters walked past TV cameras carrying armfuls of stolen goods.

Liquor stores were among those affected, as the sale of alcohol is currently banned under COVID-19 restrictions designed to ease pressure on hospitals, as were shops of companies like pharmacy group Clicks Group Ltd (CLSJ.J), and food retailers Pick n Pay Stores Ltd (PIKJ.J) and Shoprite Holdings Ltd (SHPJ.J).

As of Monday morning, the bodies of four people had been found – at least two with gunshot wounds – in Gauteng, intelligence structure NatJOINTS said. Two deaths had occurred in KZN, and all six were being investigated.

The governing African National Congress (ANC) said on Monday that the poor would bear the brunt of the destruction as critical public services had been disrupted and several small businesses destroyed.

The movement of freight out of Durban port’s container terminal was disrupted, while a logistics executive who asked not to be named said he had taken all 300 of his trucks transporting metals like copper and cobalt off the roads. The Minerals Council mining industry body said some shipments out of the Richards Bay port had been delayed.

Zuma’s imprisonment marks a significant fall from stature for a leading figure in the ANC.

He was once jailed by South Africa’s pre-1994 white-minority rulers for his efforts to make all citizens equal before the law. But for many, his reputation is now tarnished after a string of sleaze and graft scandals.

The corruption inquiry with which Zuma has refused to cooperate is examining allegations that he allowed three Indian-born businessmen, Atul, Ajay and Rajesh Gupta, to plunder state resources and peddle influence over government policy. He and the Gupta brothers, who fled the country after his ouster, deny wrongdoing.

Zuma also faces a corruption case relating to a $2 billion arms deal in 1999 when he was deputy president. He denies the charges in that case.