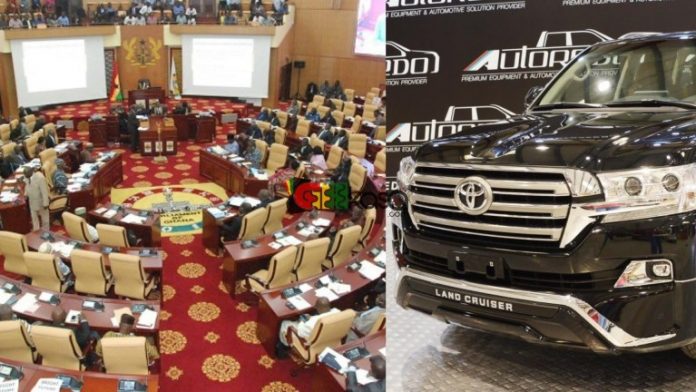 On Tuesday the 6th of July, 2021, Deputy Minister for Finance, Abena Osei Asare laid what is termed a Medium-Term Loan Agreement among the Government of Ghana, Members of the Eighth Parliament and the National Investment Bank Limited for an amount of Twenty-Eight Million Dollars to finance the Purchase of 275 Vehicles for MPs. The news of this loan agreement was received justifiably with utter indignation by a cross section of the public. It is mind boggling why government will have to go for a loan every four years to buy vehicles for members of parliament. It is even surprising that the MPs themselves consider it as a loan which they will pay back.

One wonders by what stretch of imagination they hold that view, when in actual fact government is paying 60 percent of the principal and the interest while the MPs are paying just 40 percent of the cost of the vehicle. On top, they are not supposed to pay duties or any taxes on the cars. But the problem goes beyond MPs. It is a creation of the constitution. Article 71 of the 1992 constitution isolates and elevates certain public office holders to a certain class and makes special provisions for their conditions of service. Some of these office holders are MPs, ministers and deputy ministers, judges of the superior courts, metropolitan, municipal and district chief executives, and the heads of independent constitutional bodies, whose salaries and emoluments are charged on the consolidated fund. Article 71 for instance stipulates inter alia that the salaries and allowances payable, and the facilities and privileges available to the Speaker and Deputy Speakers and members of Parliament, being expenditure charged on the consolidated fund, shall be determined by the President on the recommendations made by a committee of not more than five persons appointed by the President. It should be on record that the 28-million-dollar car loan for MPs was recommended by the Prof. Yaa Ntiamoa-Baidu presidential committee on emoluments set up by the President.

But clearly, the recommendations of this committee extended to all other officers stipulated in article 71 and it goes beyond just car loans for MPs. It touches on their salaries, allowances, office and residential facilities and retirement benefits also known as ex gratia.  This brings to the fore the huge disparities in the conditions of service of employees in the public sector. It is baffling that some sets of workers are treated specially and others treated ordinarily. The monthly salary and allowances and other facilities enjoyed by one article 71 office holder could amount to the annual salary of other workers in the public service, for instance a classroom teacher. It is sad that a teacher or a journalist in a state-owned media could work for thirty years or more and be paid a peanut as pension, whereas an MP receives huge ex gratia every four years.

As stated earlier, it is not just about MPs and Parliament. For instance, on the same day that the MPs car loan agreement was laid in parliament, another loan agreement of three point five million dollars was also laid for the purchase of 31 cars for members of the council of state. But there seems to be no complaints about them as compared to the MPs. It appears that MPs face the barrage of criticisms because of public expectations of them. Yes, they are expected to serve as a check on the executive to protect the public purse. Occasionally, opposition MPs purport to be keeping government on it toes by openly expressing their anger and disapproval over certain government decisions and policies. However, when it comes to issues which materially and financially benefit all of them, no one hears from them. Coincidentally, those issues are discussed behind closed doors in what is called the committee of the whole. It is at such meetings when matters like the car loans and the District Assemblies’ Common Fund are discussed.

The way forward is for MPs to be more open and transparent when it comes to matters which benefit them personally. They should consider allowing media access to committee sittings. Regarding the car loan, it is about time government discontinued the practice. As a matter of policy, Parliament as an institution must procure and own the vehicles and assign them to the MPs for their official use. They must leave the cars when their tenure expires and the vehicles reassigned to new parliamentarians or other public servants. But more importantly, government must work towards rationalizing salaries and other conditions in the public service so that the differences will not be that unreasonably wide.

By Bubu Klinogo, A Journalist.