The Chief Executive Officer of the Ghana Chamber of Bulk Oil Distributors, Senyo Hosi, is demanding his day in court in a defamation case he brought against the MP for Assin Central, Kennedy Agyapong.

This follows a decision by a High Court in Accra to strike out the case for want of prosecution.

“The record of the Honourable Court will show that Plaintiff/Applicant has diligently prosecuted this suit over the entire period with Counsel attending court at every adjourned date and never once defaulting in complying with any order or direction of the Honourable Court,” Mr. Hosi’s lawyers said in their affidavit.

Mr. Hosi filed the defamation case against Kennedy Agyapong after the Assin Central MP accused the CBOD CEO of bribery. Mr. Agyapong claimed that Mr. Hosi had paid a one-million-dollar bribe to a former CEO of the Bulk Oil Storage and Transportation Company (BOST), Alfred Obeng, to influence the reversal of a contaminated fuel sale by BOST to two companies.

BOST’s sale of five million litres of off-spec fuel generated media discussions, forcing the then Energy Minister, Boakye Agyarko, to set up a committee to investigate the circumstances under which the fuel was contaminated and later sold. 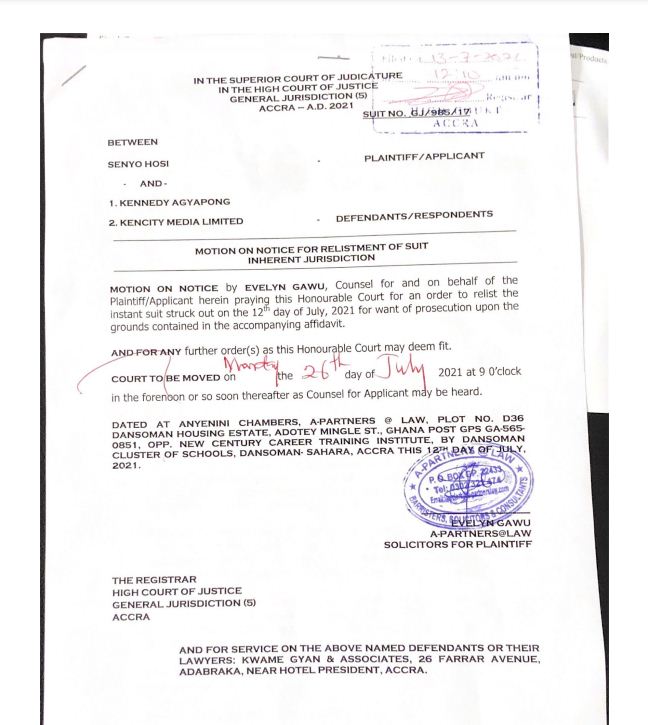