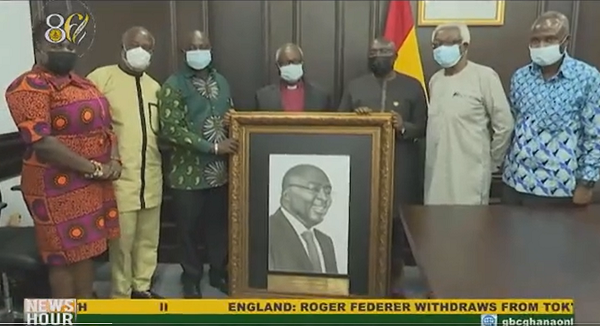 Initiators of Change Foundation, an organisation focused on governance, poverty reduction, empowerment and human resource has presented a Lifetime in ‘A Portrait Award’ to the Vice President, Mahamudu Bawumia, after being adjudged Africa’s Digital Revolutionary Leader of the Decade.

Executive Director, of the Foundation, Kofi Gyan presented the Award to Dr Bawumia at the Jubilee House, Accra.

It was attended by members of the Board of Trustees of the Foundation including former Presiding Bishop of the Methodist Church, Most Rev Dr. Aboagye-Mensah. They praised the Vice President for his commitment to accelerate Ghana’s development through digitisation.

The Award, a pencil art drawing of the Vice President, is to symbolise the enduring legacy of Dr Bawumia’s works and the positive impact he is making on Ghana’s development agenda. Mr. Gyan noted that the Foundation had in the past recognised and awarded several distinguished personalities, such as past Presidents, politicians and civil servants.

It mentioned initiatives such as the Zipline technology otherwise known as drones for quicker healthcare delivery, paperless port system, National Health Insurance registration and renewal, digitisation of the Driver and Vehicle Licensing Authority, and the National Digital Property Addressing System.

Vice President Bawumia thanked the Foundation for the honour and pledged his continued commitment to achieving President Akufo-Addo’s vision to move Ghana to the next stage of her development while reducing the burden on the poor and the vulnerable who are largely excluded in society.

1992 constitution worst in our history; it’s time to fix it

Tracey Boakye reaches out to Moesha Boduong with words of encouragement