AfCFTA to honour former Niger President with a statue 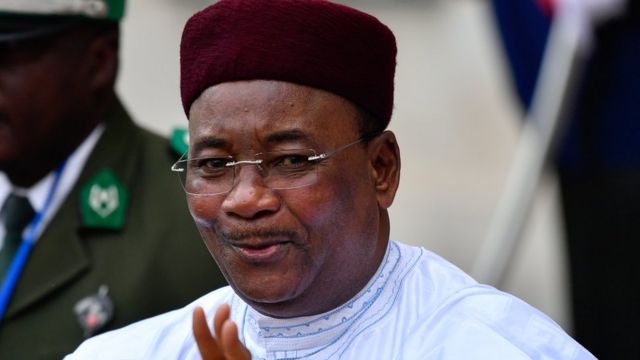 The former President of Niger, His Excellency Mahamadou Issoufou is to be honoured for his contributions to the African Continental Free Trade Area (AfCFTA) with a statue at the AfCFTA Secretariat on Friday (July 16, 2021) in Accra.

Mr Issoufou, an African Union Champion of the AfCFTA Secretariat is to be recognised for ensuring that the Secretariat was activated in January 2021 in Accra.

Addressing a press briefing on Wednesday at the Ministry of Information in Accra, the Principal Communications Advisor, AfCFTA, Mrs Grace Khoza said Mr Issoufou was also being celebrated for demonstrating selfless leadership that believes that it is time for the economic emancipation of the continent.

“We want every member of the continent when they visit the Head Office on trade on the continent to see this beautiful structure of this champion and to appreciate that it was not a miracle but men and women who dedicated themselves to hopefully a one-centralised union in the future”.

She said Mr Issoufou will also be celebrated at a formal programme on Friday at the AfCFTA Secretariat in Accra which will have at least six African Presidents and two former Presidents in attendance.

The statue will be unveiled at that ceremony before a Presidential dinner will be hosted by President Akufo-Addo later in the day.

Mrs Khoza said the Secretariat was also grateful for the support of the Ghanaian government and President Akufo-Addo for leading the Presidential effort to recognise Mr Issoufou.

His decision to step down after two terms meant Niger had its first democratic transition between elected leaders since it became independent from France more than 60 years ago.

The prize committee also praised his leadership after inheriting one of the world’s poorest economies.

It said that he had “fostered economic growth, shown unwavering commitment to regional stability and to the constitution, and championed African democracy”.

MOE terminates contract for the supply of Mathematical Instruments

‘I made a mistake’ – Akufo-Addo on Cape Coast Harbour gaffe