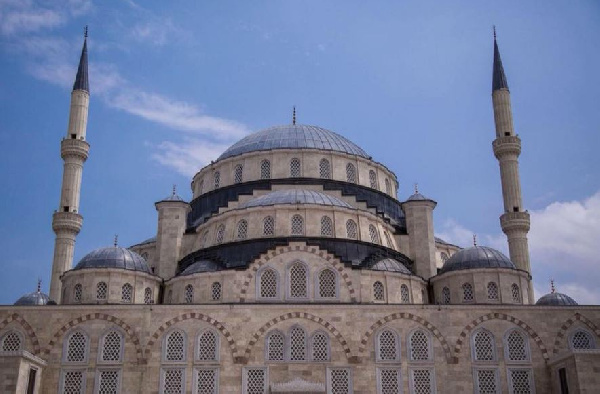 President Akufo-Addo has inaugurated the National Mosque of Ghana, the biggest central Mosque in West Africa.

The imposing edifice which was constructed at the cost of 10 million dollars is located at Kawukudi in Kanda in the Greater Accra region.

President Akufo-Addo urged both Christians and Muslims to continue to live in harmony.

The new 10 million dollar ultra-modern national mosque was built by the Turkish Hudai Foundation in Accra with the support of the Turkish government.

The 15, thousand seater-capacity mosque complex built on a 40-acre land at Kanda has ancillary facilities including a library, office and residence for the Chief Imam, research complex, a senior high school complex, a clinic, an administration block, an auditorium, and a conference center. It is the largest of the modern type in West Africa.

Built on the model of the Blue Mosque of Istanbul, it is also a sign of the close bond between Muslims in Ghana and that of Turkey.

It was paid for by a group of businessmen based in the Hudai Foundation.

The land for the mosque was handed over to the National Chief Imam, Shiekh Nuhu Sharubutu, in 1995 by former President Rawlings in replacement of a mosque demolished for the construction of the Rawlings Park in Accra.

Construction works were first started by ‘the Ghana Muslim Community’ but it was abandoned for almost 10 years due to inadequate funding.

The President, Directorate of Religious Affairs of Turkey, Prof Ali Erbas, underscored the need to have such a mosque in Ghana.

Vice President, Dr. Mahamudu Bawumia thanked the President for seeing the completion of the project. He said the inauguration of the Mosque by President Akufo Addo is an indication of the religious tolerance in Ghana

President Akufo-Addo thanked the Turkish government for its support in putting up the edifice.  He said the Mosque demonstrates the beauty of Religious harmony in Ghana. He urged the Muslim faithful gathered to use the occasion to further even Religious tolerance in Ghana.

Present at the event were the Apostolic Nuncio to Ghana, members of Diplomatic Corps, former President of Niger Mohamadu Isifu among others.