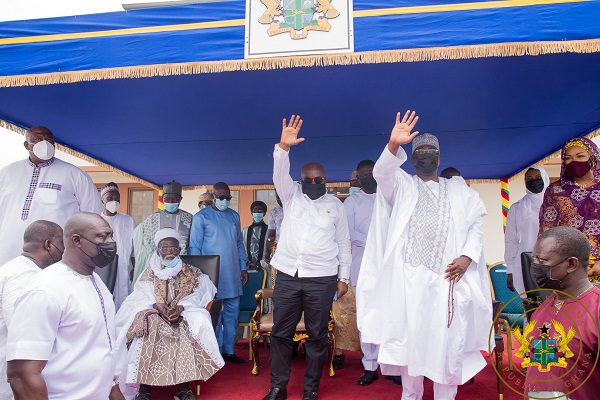 President Akufo Addo, Vice President Mahamudu Bawumia and his wife, Hajia Samira Bawumia and other dignitaries have joined the Muslim faithful at the National Central Mosque to mark the Eid-al-Adha celebration.

This is the first Eid to be celebrated at the attractive National Mosque which was inaugurated by President Akufo-Addo on Friday, July 16.

It is also the first time during this Covid-19 era that the Muslim faithful have been allowed to congregate as a family for the celebration.

President Akufo-Addo in a remark called on Ghanaians especially Muslims to emulate the leadership of the National Chief Imam which has helped deepened tolerance among all religious divides. 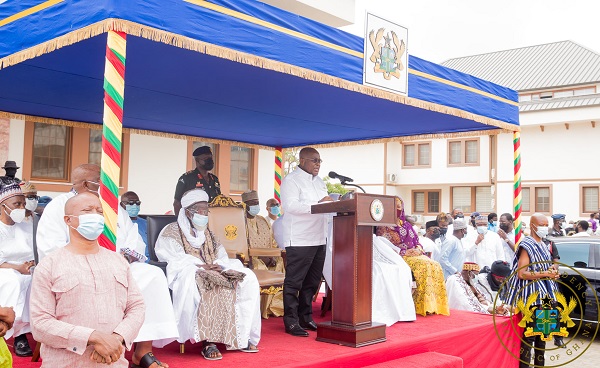 He also challenged Muslim youth to take advantage of the numerous policies initiated by government to improve their well-being.

Roads leading to the National Mosque were choked with human and vehicular traffic as many thronged the National Central Mosque to be part of the celebration. Some celebrants had to abandon their vehicles on the shoulders of the roads and walk to the mosque.

Excitement was evident on the faces of the people which did not only stem from the fact that this year, they are able to congregate but also the eagerness to catch a glimpse of the newly constructed Mosque.

The celebration began with prayers led by the National Chief Imam who prayed for peace and urged all to eschew acts that can bring disunity among Ghanaians. 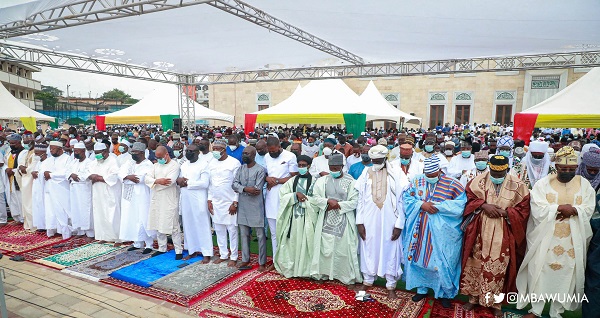 President Akufo-Addo said God has been gracious to Ghana and bestowed blessings on the nation. He said despite the effects of Covid-19, the country continues to attract lots of investments and create the needed jobs for the teaming unemployed youth. He called for tolerance among all irrespective of the religious or political divide and appealed to the youth not to allow themselves to be used for acts of violence.

On two previous occasions due to the ravaging Coronavirus pandemic, the State broadcaster, GBC had to step in to host the national prayers. Today, Muslims have the opportunity to come together. Some of them shared their excitement with GBC’s Radio Ghana.

By: Bright Ntramah and Mercy Darko.

Top Ghanaian musicians get ready for Ghana Party in London

Top Ghanaian musicians get ready for Ghana Party in London

Bagbin calls for intensified prayers for the nation