Youth unemployment in Ghana described as a security threat

Youth unemployment in Ghana has been described as a security threat. A Security Analyst, Adib Saani who said this in an interview with GBC News on the recent long queues of young people who turned out to be recruited into the military noted, that the numbers are a reflection of the dark truth about the country’s unemployment situation. This, he said poses a security risk.

Mr. Saani said the private sector should be well placed to take on the teaming unemployed youth.

He said Government initiatives and policies should be given a second look at with a focus on vocation and technical training. 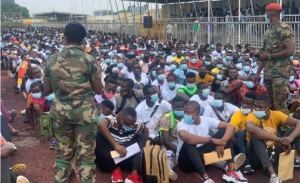 On Monday 19th July 2021, thousands of Ghanaian youth besieged the El-Wak Sports Stadium to be recruited into the Ghana Armed Forces.

Last week, the Minister Of Finance, Mr Ken Ofori-Atta gave financial clearance for the recruitment of 11,480 people into the Security Services.

COP Dampare takes over from Oppong-Boanuh as acting IGP