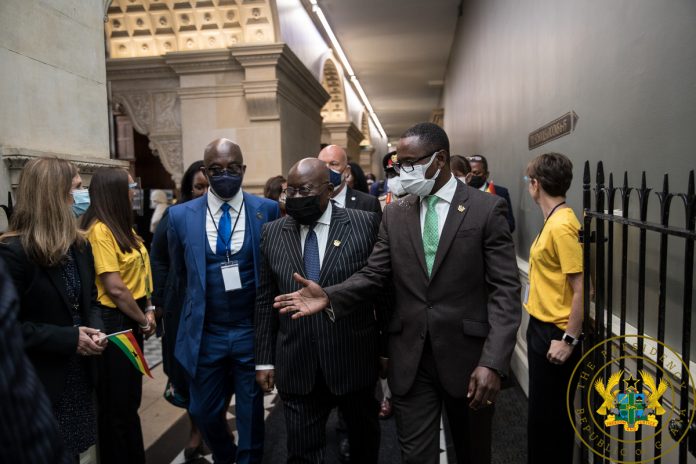 The President, Nana Addo Dankwa Akufo-Addo, has stated that for Africa to be able to transform herself, and become the epitome of economic empowerment and self-reliance, she needs to have the wherewithal to be able to protect and optimise the resources at her disposal.

To this end, President Akufo-Addo, speaking at the EBII Africa Investments Risk and Compliance (IRC) Summit, on Friday, July 30, 2021, at the University of Oxford, has admonished African governments to build robust financial compliance systems, and ensure strict enforcement of these systems.

Speaking on the theme “Financial Crime Compliance and ESG – The Future of African Investment”, the President stated a recent report has put the cost of financial crime compliance across all financial institutions, globally, at an all-time high of $180.9 billion for the year 2020.

“Five years later, according to UNCTAD’s Economic Development in Africa Report 2020, the figure has gone up from US$50 billion to $88.6 billion each year. That is a lot of money in any currency, and it is money we ill-afford to forego. It is money that would make a significant addition to the investable funds of the continent,” he said.

Persons, largely the multinational companies, who come to do business in Africa, the President said, are, undoubtedly, involved in these illicit transactions, with the complicity of some Africans.

“We must, therefore, build robust financial compliance systems, and ensure strict enforcement as a deterrent. A strong regulatory environment, whilst reducing these illicit outflows, would, in the end, lead to more private capital being attracted to the continent for genuine investment,” he added.

Welcoming the OECD’s new initiative that would require multinationals to pay tax in countries where they have commercial, not jurisdictional, presence, President Akufo-Addo stated that the “acid test of our friendship with countries, which are the hosts of these multinational corporations, should be the extent to which they oblige them to comply with this new initiative.”

He was, thus, glad to note that this principle has been publicly accepted by the G7 Nations, at their recent conference, with a proposal for a fifteen percent (15%) minimum tax rate for multinational groups on their revenues from the countries of operation.

“It is clearly a positive step in the right direction. We, in Africa, must be both vocal in defence of our interests, and vigorous in promoting remedial measures,” he stressed.

Whilst expressing relief that Ghana had been removed from the Financial Action Task Force (FATF) ‘Grey List”, following the renewal of the international community’s confidence in Ghana’s Anti-Money Laundering and Countering the Financing of Terrorism (AML/CFT) regime, President Akufo-Addo pointed out that many of the regulatory requirements put in place are cumbersome and expensive for small countries.

“For example, the FATF’s Recommendation thirty-two (32) requires countries to take measures to prevent terrorists and criminals from using cash couriers to finance their activities, and launder their funds. Countries are required to implement a compulsory declaration system requiring everyone crossing a border and transporting currency or bearer negotiable instruments of a value exceeding a certain threshold to declare it to the authorities. To Africa’s predominantly cash-based economies, this is a daunting task,” he said.

President Akufo-Addo continued, “You might, thus, find your country falling foul of the regulations, not because you have done anything wrong, but because you do not have the means to keep up with the paperwork. It would be worthwhile for all stakeholders to agree on efficient, workable measures. And yet, there is not really an option of opting out.”

If Africa is to be an integral part of the financial world, the President reiterated that “we would have to demonstrate that we can play by the rules, just as the investors should, and, thereby, safeguard the future of African investments.”