“Ghana is widening access to education for all” – President Akufo-Addo 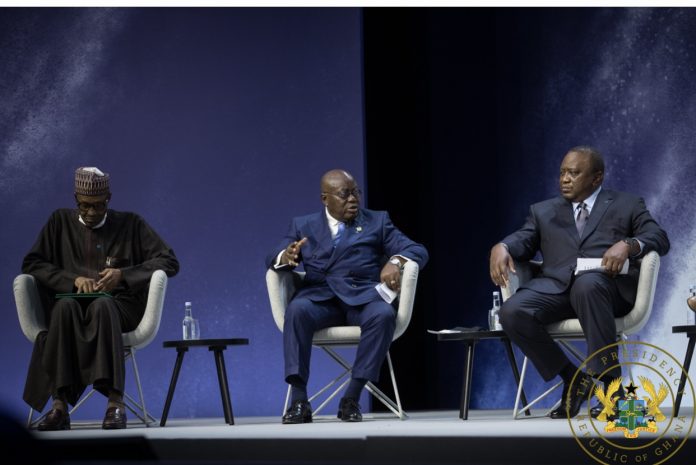 The President, Nana Addo Dankwa Akufo-Addo, says his government is widening further access to education for all of Ghana’s school-going children, because an educated workforce will help realise the vision of a progressive and prosperous Ghana.

Speaking at the Global Education Summit, co-hosted by British Prime Minister Boris Johnson and Kenyan President Uhuru Kenyatta, in London, on Thursday, July 29,  President Akufo-Addo noted that the goal of countries in Africa is to move away from being mere producers and exporters of raw materials to valued added economies.

This, the President said, is not going to be possible if Africa does not have an educated workforce.

“It, therefore, requires an investment that we have to make to ensure that not just as many, but also all our children have the opportunity to go to school right from kindergarten, through primary, through secondary, and through tertiary education,” he said.

Towards the realisation of this, President Akufo-Addo told the Summit that Ghana is on course to guaranteeing access to education for all school-going children, evidenced by the allocation of 23% of the national budget to education, adding that “it is one of the highest on the continent, and we intend to ramp it up even more.”

With the Free Senior High School policy resulting in some four hundred thousand (400,000) more children getting access to senior high school education in Ghana, the President acknowledged that problems with infrastructure, and the challenges of inadequate classrooms are being addressed.

“So, in Ghana, we’ve taken the decision that we’re going full scale ahead now that we have widened public education at the secondary school level to all and sundry, to try and replicate it also at the tertiary level,” he said.

President Akufo-Addo continued, “Until recently, if you wanted to get a student’s loan in Ghana, you had to find a guarantor, somebody who would come and say, we’ve removed the guarantor requirement. If you have the Ghana National Card, you can now go on the basis of that you get the loan, which is also going to mean a significant expansion of education at the tertiary level.”

Describing these steps as “absolutely critical for our future”, the President noted that “if we don’t do it, we will not be able to get to our basic goal, which is a structural transformation of our economies… Lives and livelihoods are both the keys to the future for us and we will hopefully continue to be to do that”.

At the end of the Summit, international governments and corporations pledged to donate $4 billion for the Global Partnership for Education, which provides fair access to public education in ninety (90) countries and territories that account for 80% of children out of school.

The summit emphasised the importance of equitable access to education amid warnings that COVID-19 has exacerbated already under-resourced public education programs in less economically developed countries. Experts alerted the organization that it was unlikely for those forced out of schools due to the pandemic to return.