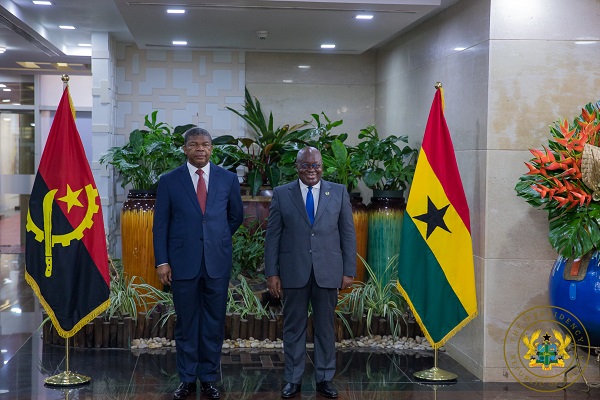 President Akufo-Addo has held bilateral talks with his Angolan counterpart João Lourenço aimed at strengthening Cooperation in the areas of defense, peace and security, mining and education, and agriculture among others.

An MOU has been signed to that effect.

Discussions centered on enhancing and deepening the ties of cooperation and the bonds of friendship that exist between Ghana and Angola.

The two leaders also pledged to work together towards ending piracy in the Gulf of Guinea.

Mr. Joao Lourenco was met at the ceremonial entrance of the Jubilee House by President Akufo-Addo after inspecting a guard of honor mounted by the Ghana Armed Forces amid a 21 gunshot salute.

The two leaders went into a closed door meeting and agreement on defense, education peace and security were agreed on and signed by their various representatives. The two sides worked on a consultation mechanism to find ways of working together in areas such as mining, defense and security and education among others.

A bilateral commission between the two countries will be established in November, this year. After the bilateral meetings, the two leaders addressed the media.

President Akufo-Addo and President João Lourenço agreed that solutions to Africa’s problems are in the hands of Africans. They were of the view that African leaders must find ways to develop their own resources to benefit all.

President João Lourenço said Africa must develop her own resources to make the continent rich.