We haven’t sold our facility to Asante Bediatuo

The management of Holiday Inn Hotel in Accra has denied rumours of selling the facility to the President’s Executive Secretary, Nana Asante Bediatuo.

They insist the claim is not true and must be disregarded.

This was made known in a press statement issued by the management and signed by the owner and Chief Executive Officer of the facility, Mr. Patrick Fares on Wednesday, August 4, 2021.

According to him, he hasn’t been approached by Mr. Bediatuo or any member of his family or the public for the sale of the facility.

“We wish to place on record that the Holiday Inn Accra Airport has not to be sold to Nana Bediatuo Asante or any member of his family.”

“As owner and Chief Executive Officer, I have, in fact, never been approached nor have I approached Nana Bediatuo Asante or any member of his family or any representative of his regarding such a sale. In fact, the hotel has not been sold and continues to be wholly owned and run by Mr. Patrick Fares and the management of the Hotel. The rumours are untrue.”

The management, therefore, asked the public to disregard such rumours.

“We will therefore entreat all Ghanaians to ignore any present or future rumors regarding the purported sale of Holiday Inn Accra Airport. The continuous spread of the rumors is affecting and disrupting our business.” 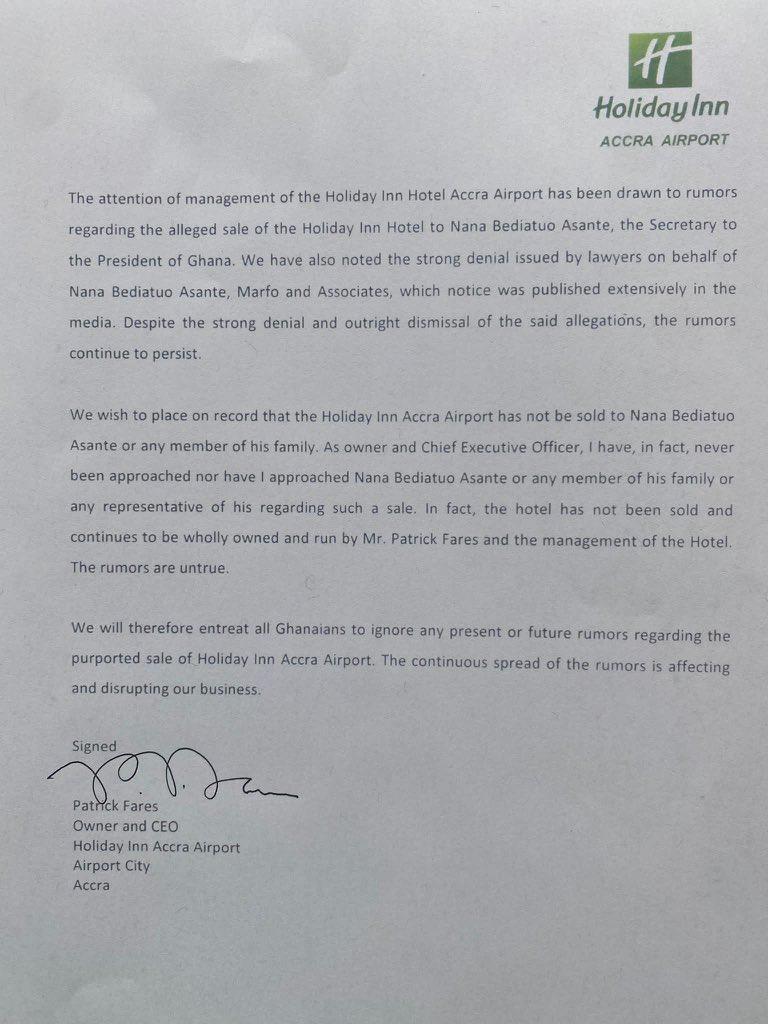 The administrator and lawyer in a statement from his lawyers on July 28, 2021, said there’s no iota of truth in the said claims.

“It has come to the attention of our client that there are persistent and widely circulating rumours that he has purchased the Holiday Inn Hotel in Airport City, Accra for his wife. Indeed, several persons, including media practitioners, both in Ghana and abroad have contacted our client to inform him of these rumours. It is obvious that the deliberate circulation of these are intended to paint our client in a negative light in view of the very senior position he holds in government.”

“We are instructed to inform the public that there is no iota of truth in the rumour. We state unequivocally that neither our client nor his wife has purchased or has any interest whatsoever in the said Holiday In Hotel,” the statement added.