Squatters invade Community Market under construction at Asokwa in Ashanti 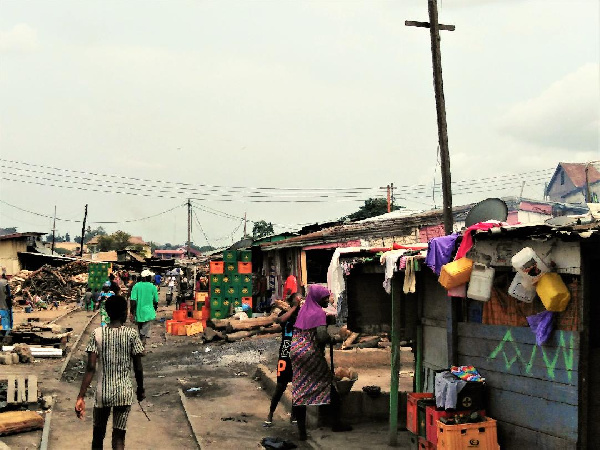 Squatters have taken over a Community Market under construction at Asokwa in the Ashanti Region.

According to our Correspondent, Nicholas Osei-Wusu, apart from the apparent unlawful occupation of the market, people believed to be internal migrants from different parts of the country have turned the area into a shanty town.

Consequently, the Chief of Asokwa, Nana Fe-Bamoah, has called on the Municipal Assembly to intervene to protect the market.

Asokwa is the capital of the recently created Asokwa Municipality as one of the five municipalities carved out of the Kumasi Metropolis. Even before the upgrade of the then Asokwa Sub Metro into an autonomous Municipality to drive socio-economic development in the new administrative area, the traditional authority had initiated the construction of a community market at the Old Town.

Residents of Asokwa have been commuting to nearby towns such as Atonsu, Asafo and the Kumasi Central Market for their household wares. Nana Fe-Bamoah officially broke the grounds for construction of the trading facility in 2008 with Messrs Manaseh Tetteh Construction Company, a local construction firm, accepting to execute the project under a Build-Operate- and-Transfer, BOT agreement.

Unfortunately, in the course of the project execution, the Managing Director of the construction firm passed on leaving the project in limbo. Since then, the market project has stalled because the traditional authorities say they do not have the funds readily available to complete it.

Some people have taken advantage of the problem to turn the uncompleted shops into residential facilities with others operating local restaurants commonly known as Chop Bars. A visit to the project site revealed that almost every usable space including the shops is being occupied by the squatters.

One issue of concern is poor sanitation. In an interview, the chief of Asokwa, Nana Fe-Bamoah told GBC News that the decision to build the Asokwa community Market was an initiative by the chiefs to create an alternative income-generating opportunity for the women of the town following the collapse of many of the timber processing companies which used to operate from the area thereby rendering most of the men there jobless.

Another major issue of concern to the chiefs but residents of Asokwa and passersby especially users of the Asokwa Interchange is the fast-growing slum that occupies part of the land for the community market.

It was observed that so far, nearly three acres of the land for the market has been occupied by slum dwellers.

According to Nana Fe-Bamoah, apart from their unlawful occupation on the community market site, the squatters are also destroying the only river in the community which happens to take its source from that occupied area.

Nana Fe-Bamoah is calling on the Asokwa Municipal Assembly to intervene to demolish the slum to allow for enough space for the community market.