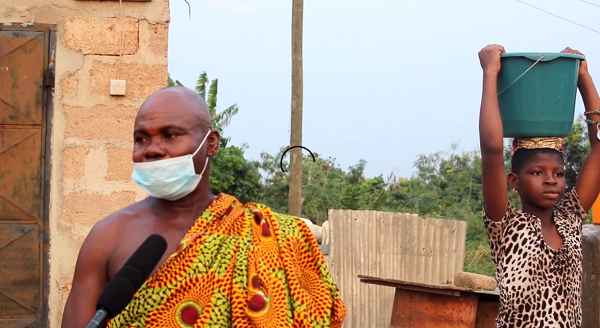 The people of Awutu Korkorbeng, a community in the Awutu Senya Bereku in the Central Region, have appealed to the government for good drinking water in the community.

For now, residents have to trek in search of water which is sometimes difficult to access and not potable. GBC’s Mavis Offei Acheampong reports that Awutu Korkorbeng got its name from the Korkorbeng mountain, which oral tradition says, was their first abode until the current settlement.

It is a predominantly farming community that grew cereals, but now cassava due to the proximity of the Bawjiase starch factory in Awutu Senya. Awutu Korkorbeng has no health facility and the only primary school is in a deplorable state.

Residents say, unlike the postpaid water system which is expensive in terms of billing, the prepaid water facility is cheaper and has been beneficial. The card is loaded depending on cash at hand. A bucket of water sells at 10 pesewas which is translated into whatever container is brought to fetch the water. The Odikoro of Awutu Korkorbeng, Odikoro Kwaku Awuah said though the system has some challenges with the network, it has done the community a lot of good.

At the time of the News Team’s visit to the community, Madam Mavis Okyere had just bought 20 Cedis worth of water credit.

For now, residents are calling for more of such water facilities in the community to ease the stress of trekking long distances to the buses, all in a bid to fetch water.

“Your achievements in Nkoranza unprecedented” – Nkoranza Chief to President Akufo-Addo