Demand for local spices up in Sunyani market 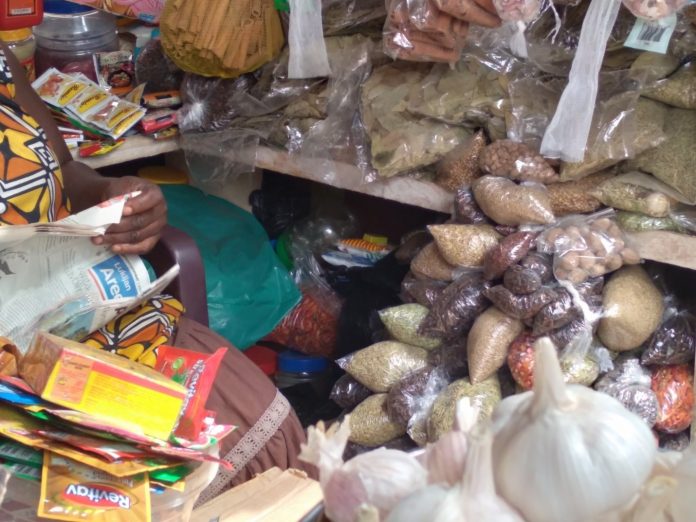 Demand for natural spices by the public in the main Sunyani Market has increased dramatically as people believe they could boost their immune system.

The traders in an interview in Sunyani during a market survey on Tuesday said that the high purchase of the natural spices has been as a result of a statement made by President Nana Akufo-Addo, that the public should consume more of the natural local spices, which could help boost their immune system in the fight against Covid-19 pandemic.

Mrs. Regina Opoku Ampofowaa in an interview said that even though the Covid-19 came with so many challenges, sales of natural spices have increased because many people have now turned to the production of local drinks such as “Sobolo” a mixture of hibiscus flowers and local spices.

She said the selling price of one tin of Negro pepper has increased from GHC 12.00 to GHC 16.00, adding that, the demand has generally affected prices of all other natural spices such as cloves, ginger, Anise-seed, piper guineense and grain of paradise in the market.

Mrs Ampofowaa said the patronage of other spices such bay leaf, rosemary, garlic, shallot, cinnamon, and dawadawa for food preparation and medicinal purposes have also gone up as many believe that they could help them control cholesterol and blood pressure.

Mrs Ruth Benewa also a trader, said consumers prefer natural spices over artificial or foreign spices since they have the belief that those ones have negative effect on people’s health.

Water supply to be interrupted in Eastern Greater Accra

LGBTQ: We cannot turn this country into a satanic one – Chieftaincy Minister rallies support from Chief Imam

Covid-19: If you miss 8-week window for 2nd jab, your protection isn’t gone – GHS on delay in vaccine procurement

Water supply to be interrupted in Eastern Greater Accra