A new hope has emerged for women who are unable to get pregnant, as scientists have succeeded in creating a viable artificial womb in rabbits, a study has found.

Researchers from the US demonstrated that the implanted wombs were capable of supporting fertilisation, fetal development and live birth — with normal offspring.

If realised in humans, the procedure — in which tissues are cultivated from the recipient — could remove the rejection risk associated with uterine transplants.

A new hope has emerged for women who are unable to get pregnant, as scientists have succeeded in creating a viable artificial womb (pictured) in rabbits, a study has found

‘The study shows that engineered uterine tissue is able to support normal pregnancies, and fetal development was normal,’ said paper author and urologist Anthony Atala of the Wake Forest Institute for Regenerative Medicine.

‘Offspring size and weight [were] comparable to those from a normal uterus.’

‘With further development, this approach may provide a pathway to pregnancy for women with an abnormal uterus.’

In the study, Dr Atala and colleagues researchers bio-engineered functional, custom-made uterus tissue cultivated from individual rabbits’ own uterine cells, which they then seeded onto a biodegradable scaffold.

Pioneered by the team, this broad approach has previously been used in humans to restore function to tubular organs like the urethra and certain hollow organs including the bladder and vagina.

The uterus, however, is a significantly more complex organ — one which must be able perform the functions of supporting an implanted embryo and subsequently enabling fetal development.  The 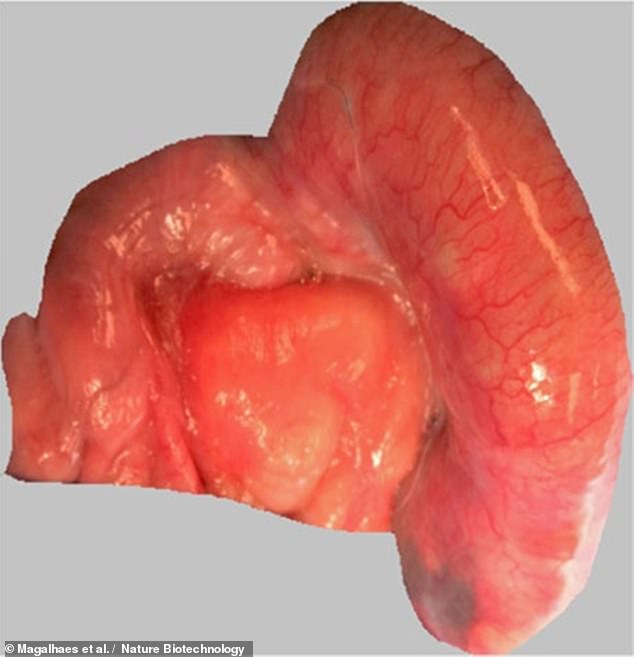 The team demonstrated that the implanted wombs were capable of supporting fertilisation, fetal development and live birth — with normal offspring. Pictured, the artificial womb

Implanting the bio-engineered scaffolds into 14 rabbits, the researchers demonstrated that the artificial wombs were able to create the native, tissue-like structures needed to support normal reproduction.

Six months after the female rabbits were implanted with the and scaffolds, the animals were allowed to mate naturally with fertile males.

‘The rabbits with cell-seeded constructs had normal pregnancies in the reconstructed segments of the uteri,’ said paper author Renata Magalhaes of the Wake Forest Institute for Regenerative Medicine.

‘This research introduces new avenues for potentially creating tissue substitutes derived from a patient’s own cells to treat uterine defects.’

Rabbits were chosen for the tests — and are often used in reproductive biology research — as, when compared with other lab. animals, they have a relatively large uterus, one with two separated horns and cervices that can both carry a pregnancy. 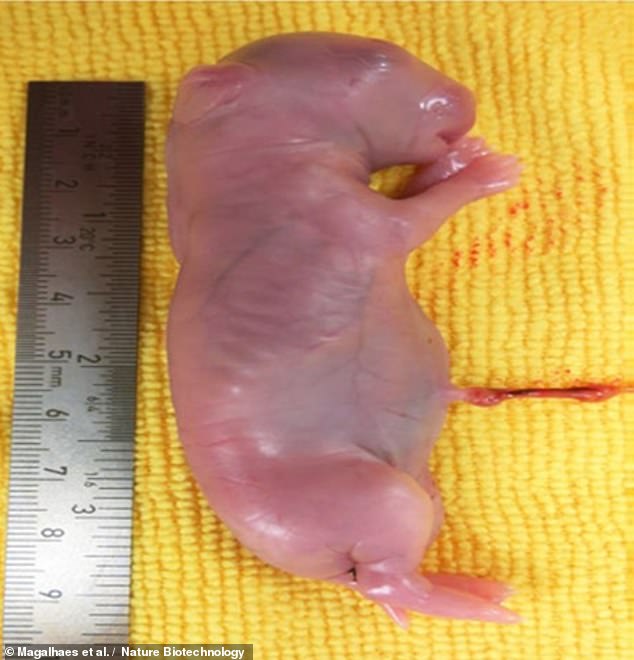 The rabbits with cell-seeded constructs had normal pregnancies in the reconstructed segments of the uteri,’ said paper author Renata Magalhaes of the Wake Forest Institute for Regenerative Medicine. Pictured, one of the young rabbits born from the artificial wombs

‘Our results indicate that the tissue-engineered uteri responded to the expansion and mechanical strains that occur during pregnancy,’ said paper author and veterinarian Koudy Williams, also of the Wake Forest Institute.

Watch The Video Below;

‘Further pre-clinical studies are being planned before clinical trials are contemplated.’

‘This is a highly significant finding with great potential for future human application,’ said University of Kent geneticist Darren Griffin, who was not involved in the present study.

‘For women who suffer infertility due to a severely damaged uterus or because of a hysterectomy then adaptations of this approach may well find clinical application.’

‘This research in rabbits uses a biodegradable scaffold with the rabbit’s own cells added – this formula is already being researched for other organs in people, so it makes sense that this could be used to reconstruct a uterus.’

‘Rabbits are however well known for their fecundity, and we do not yet know how successful this approach will be for humans. Time will tell.’

CIRCLE LA HOT: Another Guy Outsmarted With The ‘Circle’ Move, Takes Home Soap As A Phone

I Will Kill Myself And Join Nana Addo If He Dies...

Mahama enskinned as King of Development

Fadda Dickson Shuts Up Abeiku Santana After Calling Him Grandfather Of...