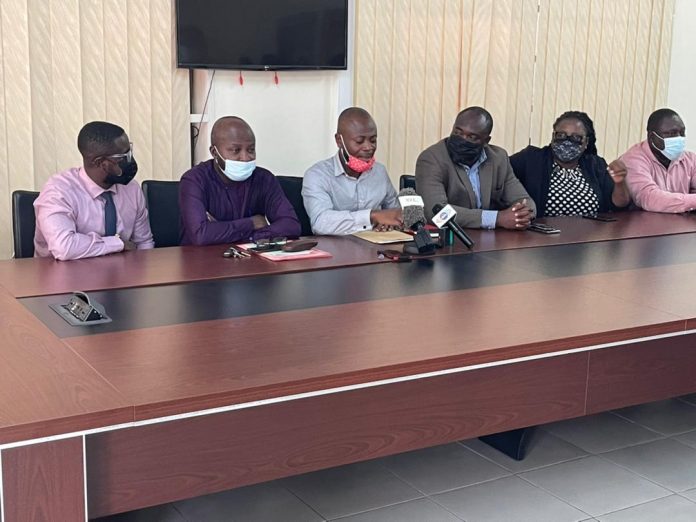 Staff of the National Lottery Authority, NLA has presented a petition to President Akufo- Addo, which demands the non-renewal of the contract of the Director-General, Kofi Osei Ameyaw.

According to them, Mr. Ameyaw has attained the retirement age of 60 years and having exhausted his one-year contract, it is only prudent that he is not reappointed as his track record of Managing the NLA is one that leaves much to be desired.

Addressing a News conference in Accra, the Local Union Chairman of the Financial Business and Services Employees Union, FBSEU Chapter of the NLA, Eric Tamakloe said their stance is borne out of recent challenges that have resulted in the staff receiving threats and in some instances attacks for non-payment of big wins across the country. This he noted is worrying, as some Operators of the Lotto Marketing Companies, LMCs have to close their kiosks due to fear of attacks from winners.

Mr. Tamakloe said there has been undue delay in the payment of salaries, as well as other emoluments. He stated that,” over the years, the Authority had an enviable record of being the second-highest contributor to the Consolidated Fund, made prompt payment to prize winners of its games, paid salaries and other emoluments without delay, as well as provided logistics such as paper rolls needed to give effect to the sales of the product of the Authority.”

He said the staff of NLA needs a new Board of Directors and a Management Team that is well experienced to turn around the fortunes of the NLA. Mr. Tamakloe however urged both staff and operators of the LMCs to exercise restraint whiles the President addresses their concerns.

Chairman of the LMCs, Justice Ampiah called for an investigation into the operations of some Private Lotto Operators known as Kid, Texter and Alpha. He said the current development at the NLA, does not only affect operations but the country’s revenue generation as well.

Stop the attacks on Speaker Bagbin, he didn’t tell NDC MPs to vote the way they did – Ras Mubarak

Stop the attacks on Speaker Bagbin, he didn't tell NDC MPs to vote the way they did - Ras Mubarak

Mahama to respond to 2020 Election petition judgment at 6 p.m.