The governing New Patriotic Party (NPP), has condemned the controversial textbooks said to have stereotyped Ewes.

Describing the books as “incompetent and inept” the NPP in a statement signed by its Communications Director, Mr. Yaw Buaben Asamoa demanded the withdrawal of the said textbooks from the market.

The party also asked Ghanaians to respect each other as one people to “drive international competitiveness for Ghana and open opportunities for our young people to master their talents and fulfil their dreams.”

“Current global values project universal human rights, encompassing respect for all peoples irrespective of nationality, ethnicity, religion, culture or gender. Economies are being built on digital technology and innovation, creativity and skills development. These are what will drive international competitiveness for Ghana and open opportunities for our young people to master their talents and fulfil their dreams.”

The party also urged the National Council for Curriculum Accreditation (NaCCA) to use the infamous situation to “refine and enforce their rules without fear or favour.”

Badu Nkansah Publications, publishers of some textbooks meant for basic school pupils have been widely lambasted over portions of the books said to have denigrated the Ewe ethnic group in Ghana.

The textbooks – History of Ghana, Text Book 3, was authored by Badu Nkansah and Nelly Martinson Anim; while the Golden English Basic 4 was authored by Okyere Baafi Alexander both of which were said to contain bigoted content targeted at Ewes.

The publishers subsequently apologised, but the apology seems to have not been accepted by the public.

For instance, the Volta Regional House of Chiefs is demanding an immediate withdrawal of the said textbooks.

According to the chiefs, the said publication is “distasteful and a disgrace to the authors and publishers”.

They in a statement said: “We deem it highly reprehensible for those responsible for this offensive publication, to harbour such vile thoughts about their fellow citizens of Ghana in the twenty-first century”.

“We therefore unreservedly condemn this singular demonstration of tribal bigotry and prejudice and call on those responsible for the offensive publication, to withdraw the same from circulation and to destroy every part of the offending material.”

“We further demand an unqualified apology from the authors and publishers of this base material to be rendered to all Ewe speaking citizens of Ghana. In addition, we urge other ethnic groups in this country, to condemn such divisive publications which only serve as a recipe for chaos and disunity.”

Below is the press statement by the NPP 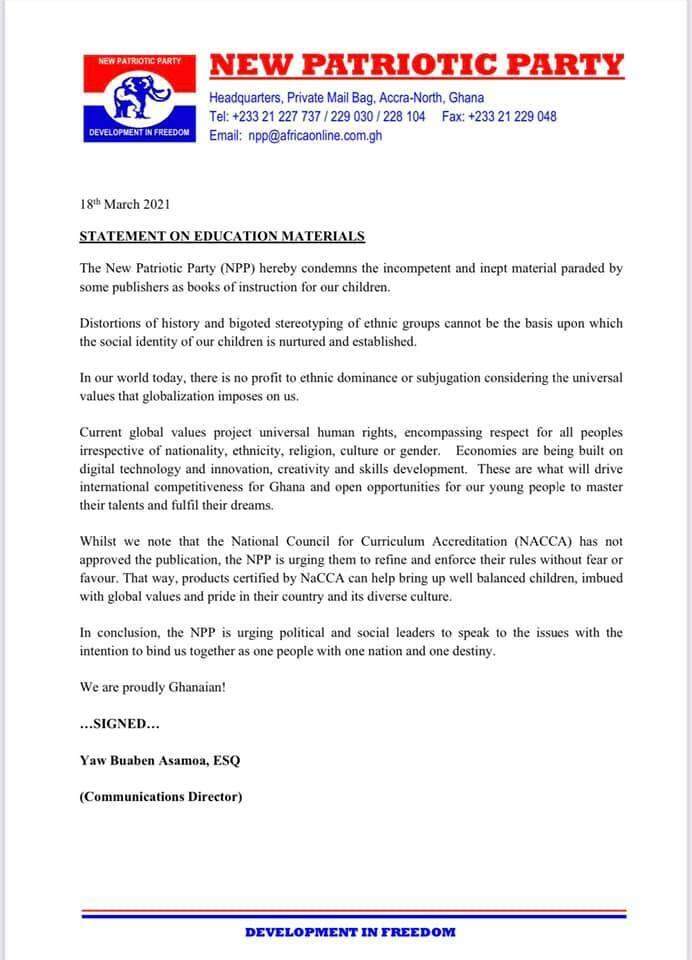