General Secretary of the Teachers’ and Educational Workers’ Union (TEWU), Mark Dankyira Korankye has urged all TEWU members with the exception of the Finance, Medical and security directorates to comply with the directive to lay down their tools as they await government’s response to their petition.

Speaking at a meeting to declare the Union’s indefinite strike, Mr. Korankye said a taskforce will be formed to go round campuses of Public Universities across the country to ensure full compliance with the directive.

He said the Union will not call off its strike until negotiations on their conditions of service are concluded and other needs met.

Meanwhile, government has conferred with the leadership of TEWU to deliberate on outstanding issues following the declaration of strike by its members.

The emergency meeting was convened by the Ministry of Employment and Labour Relations.

“The parties have agreed that on the issue of risk allowance, job re-evaluation be conducted for members of TEWU who are exposed to imminent hazards.”

“On the issue of Non-Basic Allowance, consultations would be held with the Government on certificate of urgency and the outcome conveyed to TEWU as soon as possible,” the communique dated Wednesday, January 13, added. 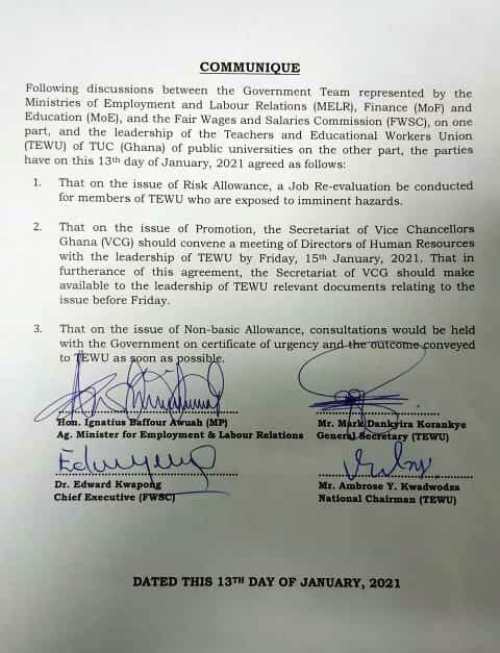 Mahama moves to amend his application for review of ruling on...

Desist from self-medication, get tested if you show flu-like symptoms –...

I would have slapped the spirit out of Cecilia Marfo- Kumchacha