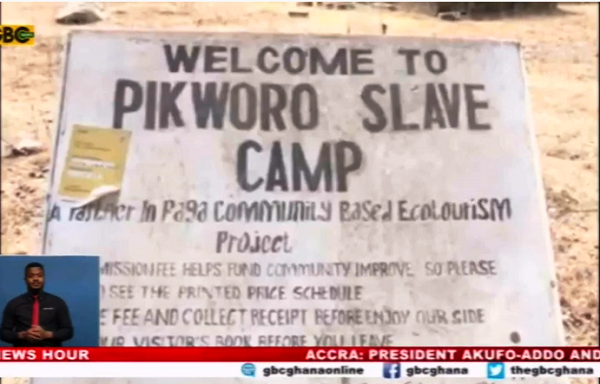 In 1704, the Pikworo Slave Camp was founded. It is located in Paga-Nania in the Kassena-Nankana West District, of the Upper East Region, about 3km west from Paga. Today, the slave camp is a tourist site and the authorities are appealing to government and NGOs to help with a facelift. It was originally developed as a slave transit center where slaves were auctioned and later resold in the Salaga slave market.

At the site, our tour guide, Mr. Richard Achegiwe, explained that Pikworo means “place of rocks” and was chosen due to its unique landscape. The tour started with an explanation of the historical significance of the camp and some background information. The site was identified as an old Slave Camp in 1992 and brought to the attention of the Ghana Tourist Board in 2002. The founder of the camp was Bagau, who had controlled the land and transformed it into a Slave Camp with no help or consent from the surrounding community.

Slaves from Northern Ghana, Burkina Faso, and other nearby communities were brought to Pikworo and held for a few weeks until buyers would send them to the Salaga Slave market and eventually, through Yeji to Assin Manso and then to the coast. The masters at the camp were Ghanaians working for white men on the coast, to supply slaves to white buyers.

Our tour guide first took us to the trees where the slaves were chained all day, every day, unless doing some daily task, such as entertainment or eating a meal. It was explained that the camp was unique because water was always available in the crevices of the large rocks that populate the camp. This was a very important feature because water is so scare in the area. We were taken to the rocks where their one meal of the day was prepared and served around dusk. The females of the camp had to prepare the meal with the few resources provided by the masters, and they served the food in holes in the rock that were manually hallowed out by the slaves. The size of the holes in the rock determined how many slaves would be served out of that vessel.

The food was just enough to keep them alive, but not to filling. At dinner, the masters would choose dancers and singers from each tribe to entertain the camp. We made our way over to two large boulders that served as drums for the entertainment. When struck with other rocks, these boulders made sounds that imitate drums. The masters knew that singing and drumming could help with the stress and morale of the slaves which could in turn motivate them to survive. The masters also inspire the slaves by telling them that going to the coast was a special opportunity to be educated by the white men and learn skills that would make them more successful upon their return home. Next, we visited the meeting place of the slaves where the masters stood on top of a large pile of rocks to examine the slaves below them and select who to bring with them on their multi-month march to Salaga. We also visited the watchtower of the slave raiders. Slaves took turns to occupy the tower to look over the camp and watch for runaways and slave liberators. If there was something wrong, the person on watch would bl ow a cow horn to alert the camp. Later, we visited the cemetery for dead slaves where the mass graves were marked with a big rock surrounded by a circle of little rocks. It was heartbreaking to see how little recognition there was for the large number of lives lost. It was common for slaves to die from snake bites, starvation, and brutal punishment.

Our last stop was the “Rock of Fear” the so-called punishment rock where slaves sat with their hands tied behind their back and their feet crossed and chained to the rock. They were forced to watch the sun from sunrise to sunset and many lost their eyesight over the course of the day. The third punishment on the rock was almost always fatal, and all of the slaves gathered to observe this death take place.

The news team observed that the structures that serve as a reception are all in a deplorable state. Link roads are not in good shape. The tourist site has no decent toilet facility. Some philanthropists who patronized the tourist site provided the facility with a borehole during the year of return. Paga-Nania is a farming community with a population of over three thousand. It was difficult being at a location where such suffering and pain was experienced. It was overwhelming to think about the atrocities that occurred in this very place. For the team it was a feeling of sadness, guilt, and shock at what transpired. After some time of reflection, we left the camp with heavy hearts and new perspectives.

“To Love or to Hate: Politics the opium of sympathizers” – Hon. Derrick Amoah

"To Love or to Hate: Politics the opium of sympathizers" - Hon. Derrick Amoah

State of the Nation Address slated for Tuesday; budget on March 12