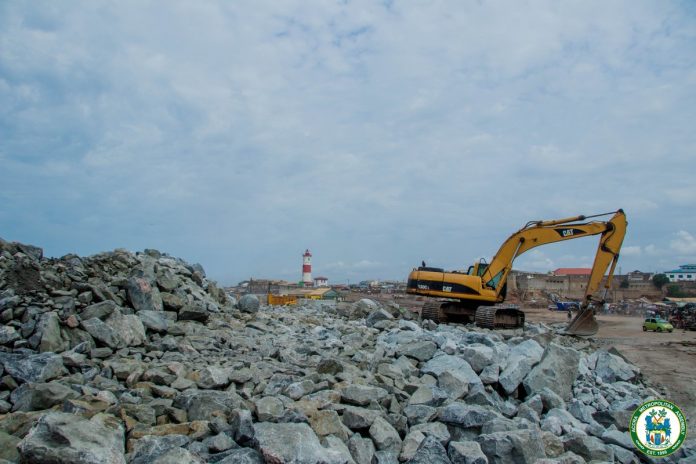 Construction of the Jamestown Fishing Habour has resumed after a brief stoppage due to the COVID-19 pandemic, and is about 20 percent complete.

The Chinese company undertaking the job confirmed the project is a Habour and not a sea defense project as was speculated.

The residents who initially refused to move from the construction site have now relocated, paving the way for work to go on smoothly.

The visit by Radio Ghana to the Jamestown beach is a follow up to a previous one barely 8 months ago when the Chinese construction company was clearing the area for work to commence.

The construction did not take off smoothly as residents around the site refused to move amid numerous allegations.

The residents claimed the construction was for a sea defense project, instead of a fishing habour while accusing government of selling the land on which they reside to the Chinese government without their knowledge.

For this reason, the residents refused to move to a piece of land near the Korle Lagoon which was allocated to them for resettlement, with claims that the place is inhabitable.

However, all the wooden structures around the site which served as settlements for the fishermen and fishmongers and were visible during the visit 8 months ago are now missing, an indication that the people have relocated.

Business Manager of the Jamestown Fishing Habour, Kimi Hu confirmed to Radio Ghana that the project is a Fishing Habour and not a Sea Defense Project.

The residents, mostly fishermen who have now embraced the project, raised concerns about uncertainties of fishing in the area once the construction of the habour is complete.

A resident who spoke to Radio Ghana made an appeal to government for a proper relocation plan ahead of completion.

When completed, the habour is expected to boost the country’s fishing industry with 26,000 metric tons of fish annually over a thousand local fishermen can ply their trade at the Habour.

Queen Ciara shares a fun time video with her triplets